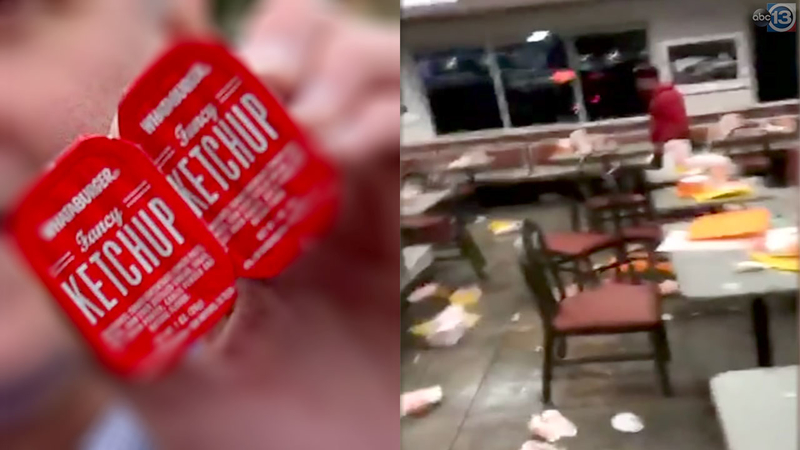 EMBED <>More Videos
FRIENDSWOOD, Texas (KTRK) -- The food fight at a Whataburger that purportedly began between rival high schools escalated quickly from something small, according to an eyewitness.

It started with ketchup packets, then someone tossed a drink, and it devolved from there.

It almost looks like a scene out of television comedy, but there is nothing funny about the confrontation that left a mess on Friday night at the fast food joint on Gulf Freeway near El Dorado.

"I saw a drink fly by my face and I was like, 'Heck no,' and I ducked down behind a table," said eyewitness Caleb Johnson.

Johnson is a senior at Clear Lake High School. He was there, and though he didn't participate, he described what happened after a game between his school and district rival Clear Brook.

"In there, there were probably 150 kids," said Johnson. "But involved was probably, like, 30 throwing and yelling in total."

After the fight ended, Johnson said most of the students left at the direction of a security guard. He said he stuck around with some students from both schools to help clean up.

Both campuses are part of Clear Creek ISD. The district is aware of what happened and issued a statement on Monday to Eyewitness News:

"While this incident did not involve the Clear Creek Independent School District, occurred off campus, and unrelated to any school sponsored activity, the school administrators are disappointed with the behavior of the youth involved. Unfortunately, the school district does not have jurisdiction over student actions of this kind in the district's code of conduct. Both principals have personally reached out to the restaurant's owner to reassure him the actions of a few do not reflect the entire student body."

"To the employees here, it was bad," he said. "It shouldn't have happened. Either way, it was disrespectful and rude. I'm sorry for all y'all that had to clean up."

As for Whataburger, ABC13 reached out to the corporate office to ask for a statement. The company is aware of the incident but has not yet offered comment.