Xavier Jawin Howard is charged with murder in the strangulation of his mother-in-law Tammy Mouton on Jan. 7 on Trementina Drive.
KTRK
By Charly Edsitty 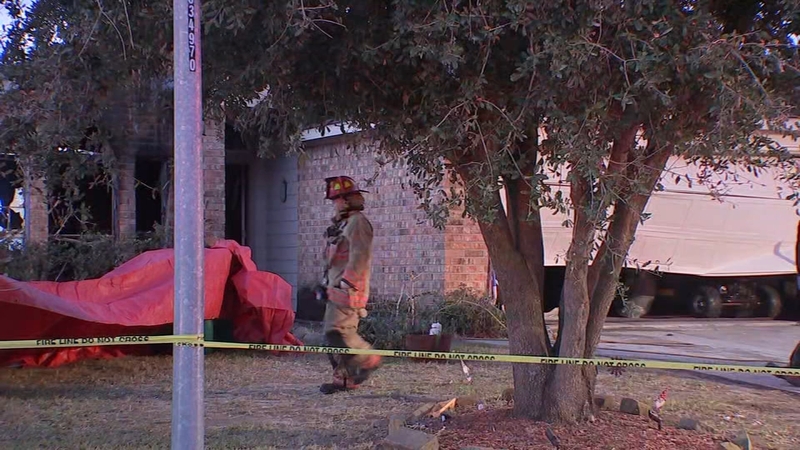 HARRIS COUNTY, Texas (KTRK) -- A man who was initially credited with saving his children from a house fire is now accused of setting the fire to cover up the murder of his mother-in-law.

Investigators said the injuries Mouton sustained were not consistent with a house fire.

A judge set his bond at $2 million for the murder charge and $50,000 for the escape charge, stating that he believed Howard was a significant flight risk who also posed a risk to his family and the public.

If he meets bond, he must wear an ankle monitor and remain on 24/7 house arrest. He also cannot have contact with any witnesses, including his wife and their children.

Authorities responded to a house fire around 5 a.m. on Jan. 7 at a home on Trementina Drive near Gavin Place Lane in northwest Harris County.

It's a tragic way to start the new year for a family in Harris County after a grandmother died in a house fire. Here's what one relative told us about the victim.

After extinguishing the fire, crews said they found Mouton dead, laying face up on the floor. The rest of the family was in the front yard.

Fire marshal's investigators said the fire was contained to Mouton's bedroom in the front of the house.

Howard's 8- and 10-year-old children were still inside the home during the incident, investigators said.

It was revealed in court that although the children were taken to the hospital for smoke inhalation in critical condition, they have both since been released.

Howard was also treated for smoke inhalation and cuts to his body.

As for the mother of the children, she was not home at the time, investigators said. Mouton had just recently moved into the residence.

Investigators are now saying Howard allegedly strangled Mouton, and then intentionally set the home on fire, trying to hide the death. He allegedly fled the scene after setting the flames.

FULL COURT APPEARANCE: The autopsy found that the victim had no soot in her lungs, meaning she died before the fire. Prosecutors said video and cellphone data contradicts the suspect's story.

According to prosecutors, Howard told fire marshal investigators he lived at the home with his wife and their two kids, but his wife wasn't home at the time of the fire.

He said the couple got into an argument over text the night before about their relationship. He told investigators he left the home, but came back, and his wife wasn't there.

He allegedly told investigators he then tucked the kids into bed and left the house again. He said he slept that night in his minivan in a Walmart parking lot.

Howard then reportedly told investigators his wife called him around 4 a.m. the next morning to tell them the house was on fire. That's when he says he returned to the house and helped pull the kids from the home.

Investigators said Howard claimed he tried to rescue his mother-in-law, but wasn't able to.

The medical examiner's autopsy found that Mouton had hemorrhaging and neck fractures, consistent with external pressure to the neck. She also had other abrasions on her head.

In contradiction to Howard's story, the medical examiner found that she had no soot in her lungs, indicating she was already dead before the fire occurred.

The medical examiner classified her death as a homicide.

Investigators said they spoke to Mouton's daughter, who is also the sister of Howard's wife, who told them the wife sent texts to her the night before the fire that said, "He's tripping again."

The victim's daughter told investigators her mother and sister had discussed previous "strange and violent" behavior from Howard toward them in the past.

Video reportedly shows a silver minivan, matching the description of Howard's, park on the street near the home around 3:15 a.m. on Jan. 7.

Prosecutors say the video shows a man get out of the minivan and walk toward the home, entering the property through a gate that leads to the back yard.

Around 5 a.m., prosecutors say the fire can been seen on the video. Shortly after, the man leaves the home and walks back to the minivan.

Prosecutors said around 5:07 a.m., the man drove the minivan up to the home and got out without a shirt on.

Investigators searched Howard's cellphone and found texts between him and his wife, where he was asking her to come home. She reportedly told him to leave her alone and referenced Howard's alleged past attempts to kill her.

Family members who gathered at the home that day were in tears talking about the loss of Mouton.