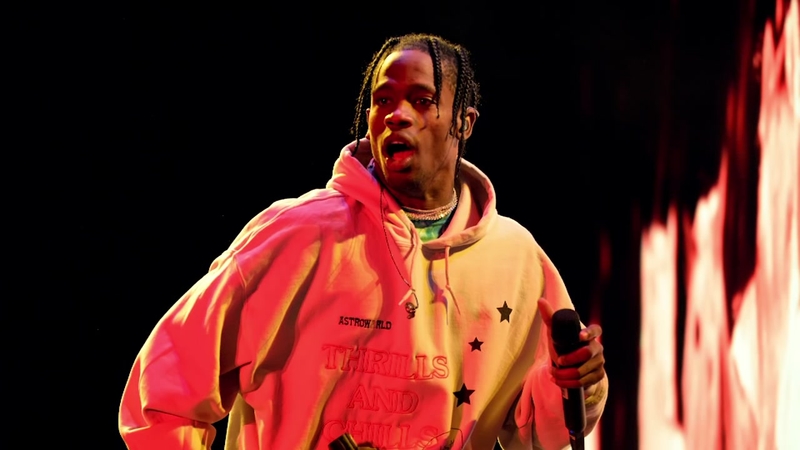 The rapper tweeted about it Tuesday afternoon writing," Saved some tix for the city at these voting locations. Go vote."

SAVED SOME TIX FOR THE CITY AT THESE VOTING LOCATIONS. GO VOTE !! pic.twitter.com/tVAu0DGzna

The tickets have been left at the Frenchy's Chicken at 3919 Scott St. and the Missouri City Community Center at 1522 Missouri City Dr.

Scott has been spotted at Rep. Beto O'Rourke's rallies around the Houston area.

The Astroworld Festival in Houston is Nov. 17 at NRG. It is sold out.

The inaugural festival is set to take place across the street from the former home of Astroworld, an amusement park that opened in Houston in 1968.

Scott says the ultimate goal for the festival is to create a space for music fans to come together and celebrate all things "La Flame" while also having a substantial positive economic and cultural impact on Houston.

"Travis, myself and our entire Cactus Jack team couldn't be more excited to finally reveal our plans for the first-ever Astroworld Festival," said David Stromberg, Travis Scott's manager and GM of Cactus Jack Records. "Our ultimate goal in launching this Fest is to bring some well-deserved recognition to Travis' hometown of Houston, the place that has made him both the man and creative artist he is today. H-Town has an incredible rich cultural history, and we look forward to showcasing to residents from Travis' own backyard and across the globe what makes this city so special. Make sure to get your tickets now as the inaugural Astroworld will be a really special and unique experience not to be missed."
Report a correction or typo
Related topics:
politicshoustonmissouri cityrap musicrapperelection 2018election dayvote 2018
Copyright © 2022 KTRK-TV. All Rights Reserved.
ELECTION DAY
Harris County Election Day process under fire by Republican Party
Pennsylvania election results: Mehmet Oz, Dave McCormick neck and neck
Texas' primary runoff election: What to know about voting
Harris Co. election workers finish counting primary election votes
TOP STORIES
Coast Guard suspends search for Houston woman off Alaska coast
Child left alone starts E. Houston apartment fire
The Railroad Killer
US, South Korea open to expanded military drills to deter North
10-month-old girl left in hot car for 'several' hours, HPD says
Your chance of rain is going up this weekend
At least 1 dead, 44 injured after tornado strikes northern Michigan
Show More
Known white supremacist threatening armed standoff at Texas Capitol
Katy ISD employee's husband accused of stabbing wife to death
Judge: COVID-19 asylum restrictions must continue on US-Mexico border
Track your fitness with an app? Doctors wary about certain ones
Harris County Election Day process under fire by Republican Party
More TOP STORIES News