In both cases, the girls somehow managed to get into the water without anyone seeing them until it was too late.

"The children were excited about getting to go swimming," Harris County Sheriff Lt. Kim Fonville said.

That excitement turned into a nightmare on Windcross Court in Katy around 5:40 p.m. Sunday.

A girl is in "extremely critical" condition after she was possibly left unattended and found unresponsive, Sheriff Ed Gonzalez says.

Deputies say two adults were inside getting towels when the child somehow got into the backyard and into the pool.

It was another child who was with the victim who alerted the adults. They performed CPR. The child was revived but has not recovered and is in critical condition.

Deputies said the child was not in the water very long before being found.

"From what the grownups told us, about three minutes," Fonville said.

Nearly three hours later, deputies got word of another incident involving a child just a few miles away on Paintedbrush Dawn Court.

"When the deputies arrived on the scene, they saw EMS performing CPR on a child," Fonville said.

Child found unresponsive in hot tub at party in Katy

Deputies say there was a house party with more than a dozen adults, but apparently no one was keeping a close eye on the pool and the connecting hot tub.

At some point the adults realized a 2-year-old girl was missing.

"Somebody looked into the hot tub and the baby was under water. She was immediately retrieved and CPR was started by the homeowner," Fonville said.

For pool parties, don’t assume everyone is watching, cause undoubtedly no one is. Have a designated pool watcher to keep an eye on swimmers at all times. This should be a responsible adult who will not become distracted.#HouNews

Deputies say no one saw what happened. The adults turned their backs for just seconds. And that's all it takes for a tragedy to happen. It is a grim reminder that pools require constant supervision when children are present no matter how many people are around.

"I know absolutely what they are going through and it is horrific," Christi Brown said.

Brown's 2-year-old son, Judah, drowned back in 2016. She's now using the Judah Brown Foundation, which was started by family friend Annette County, to teach pool safety to as many kids as possible.

According to the Centers for Disease Control and Prevention, the main factors that affect drowning risk are lack of swimming ability, lack of barriers to prevent unsupervised water access, lack of close supervision while swimming, location, failure to wear life jackets, alcohol use, and seizure disorders.

Watch your kids around the pool.
According to the CDC children ages 1 to 4 have the highest drowning rates. In 2014, among children 1 to 4 years old who died from an unintentional injury, one-third died from drowning. pic.twitter.com/I1TD9D0DVy

Brown said adults need to establish layers of protection around the water like window, door and pools alarms. 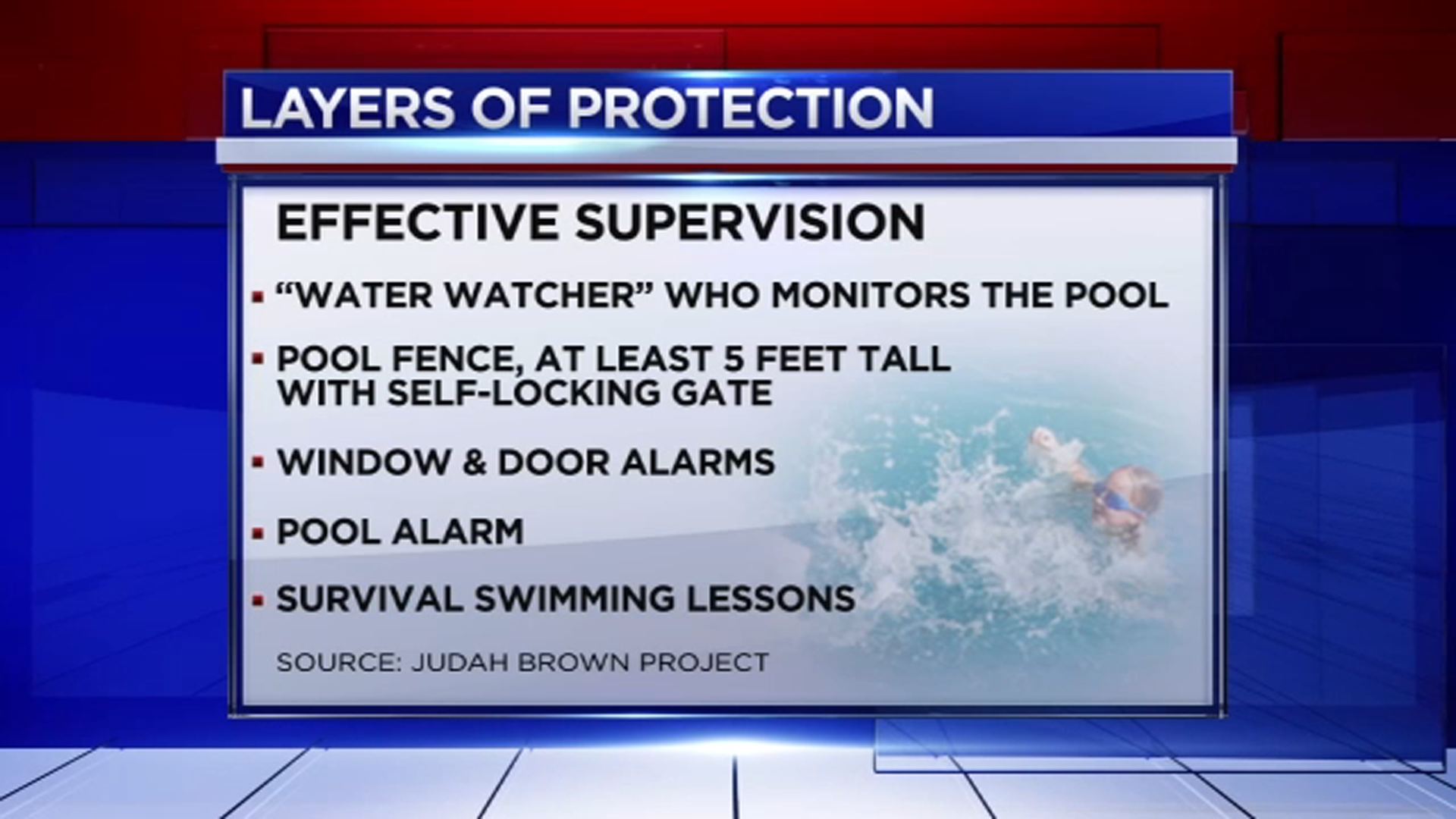 "As soon as they can crawl they can drown," Brown said.

Also, make sure a CPR certified adult is around the pool when kids are present.

Brown passes out tags that are used to designate a person as a water watcher around the pool.

When seconds matter, just like in these situations, learn CPR. CPR performed by bystanders has been shown to save lives and improve outcomes in drowning victims. Click here to learn more about classes through the American Heart Association.

Before you head to the pool this summer, check out these pool safety tips.