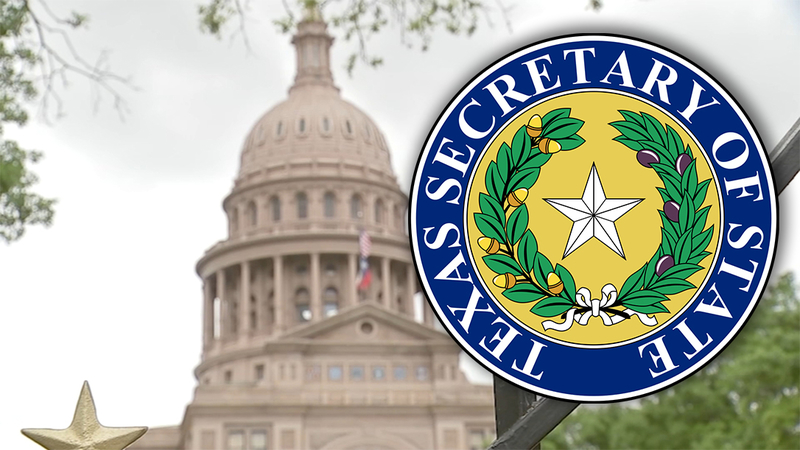 As secretary of state, Scott would oversee election administration in Texas - a task complicated in recent years by baseless claims of election fraud from Republicans in the highest levels of government, fueled by Trump. The former president has filed a flurry of lawsuits nationwide and called for audits in Texas and elsewhere to review the results of the 2020 presidential elections. Trump's own attorney general, Bill Barr, said there was no evidence of widespread voter fraud nationwide, and in Texas, an official with the secretary of state's office said the 2020 election was "smooth and secure."

RELATED: Secretary of State Ruth Hughs resigns after Senate takes no action on her confirmation

On Nov. 13, Scott signed on as counsel to a lawsuit filed by Trump attempting to block the certification of Pennsylvania's election. A few days later, on the eve of a key hearing in the case, Scott filed a motion to withdraw as an attorney for the plaintiffs. Scott's motion also asked to withdraw Bryan Hughes, a Texas state senator from Mineola who works for Scott's law firm, as an attorney for the case.

Scott's law firm was the second in the span of a few days to withdraw from the case.

Hughes said Trump's campaign reached out to Scott "because he's a stellar lawyer."

"It's not surprising," he said.

Hughes said they bowed out of the case because there was a ruling about standing that had come down from a federal appeals court that "really just gutted our case."

"There really wasn't much to do after that," Hughes said.

"Texas' already chaotic Secretary of State's Office will be headed by someone intent on paving the way for Trump's 'Big Lie,'" Angle said in a statement. "By appointing a known vote suppressor to oversee our elections, Abbott is knowingly putting Texas elections in jeopardy and our future at risk just to cruelly hang on to power."

Abbott has not responded to a request for comment on whether Scott's involvement in the lawsuit was a consideration in his appointment.

The top elections position has been open since the end of May, when former Secretary of State Ruth Hughs resigned. Scott will eventually have to be confirmed by the Legislature, which ended a nine-month slog of lawmaking just 10 days ago. The Legislature is not scheduled to meet again until 2023. Until then, Scott will serve as interim secretary of state and will oversee next year's statewide races, in which Abbott will run for reelection.

Abbott's announcement of Scott's appointment did not mention Scott's work for Trump - even as Abbott has endured mounting pressure from Trump supporters to call for an audit of the 2020 elections.

"John Scott is a proven leader with a passion for public service, and his decades of experience in election law and litigation make him the ideal choice for the Texas Secretary of State," Abbott said in a statement. "John understands the importance of protecting the integrity of our elections and building the Texas brand on an international stage. I am confident that John's experience and expertise will enhance his oversight and leadership over the biggest and most thorough election audit in the country."

In September, Trump publicly called on Abbott to add an election audit bill to a 30-day special legislative session even though the former president won in Texas.

A day later, Abbott announced the state was reviewing election results in four Texas counties: Collin, Dallas, Harris and Tarrant. But he has so far resisted pressure to pursue a deeper review.

Scott is no stranger to election law. When Abbott was attorney general, Scott worked under him as a deputy attorney general in 2014, when he defended the state's voter identification law. Federal courts found the law to have discriminatory effects, and a district court also found it intentionally discriminatory.

Eventually, lawmakers had to rewrite the law to address concerns from the 5th U.S. Circuit Court of Appeals.

"Texans deserve a chief election official who has a career dedicated to the protection of the right to vote and not one who participated in Trump's lawsuits undercutting our democracy," she said in a statement.

Scott will also be the state's liaison to Mexico, the state's biggest trading partner, and will advise Abbott on border and trade affairs.

Abbott's last two appointments for the top elections position, Hughs and David Whitley, were not confirmed by the Senate. Hughs resigned in May after the Senate refused to consider her confirmation.

Whitley resigned at the end of the 2019 legislative session after overseeing a botched effort to scour the voter rolls for supposed noncitizen voters. Thousands of naturalized citizens had their right to vote threatened in that effort, which landed in federal courts and prompted a congressional investigation. The state agreed to end that review and paid $450,000 to plaintiffs for attorney's fees in the lawsuits.

Sen. Carol Alvarado, D-Houston, who sits on the nominations committee that approves the governor's appointees said Scott's representation of Trump in an effort to block election results is "extremely alarming."

"This person gained notoriety by representing Donald Trump in court during the attempt to overturn the 2020 election, and this is not the kind of person - this political type of appointment, this political hack of an appointment - that we need," said Alvarado, who leads the Texas Senate Democratic Caucus.

She said secretaries of state need to have good relationships with county officials and be nonpartisan. Scott's work for Trump complicates that, she said.

But Hughes, who works with Scott and has known him for eight years, said he was confident senators will be able to look past Scott's involvement in the post-election Trump litigation and focus on his full background and qualifications.

Scott has 33 years of legal experience, arguing more than 100 legal cases in state and federal courts, including the U.S. Supreme Court. Working at the attorney general's office under Abbott, Scott was deputy attorney general for civil litigation, overseeing more than 22,000 lawsuits for the state. He later was appointed chief operating officer of the state's Health and Human Services Commission, where he was in charge of 56,000 employees and a biennial budget of $50 billion.

In 1998, Scott gained national attention for winning $28 million in an asbestos lawsuit. At the time, it was the largest jury verdict of its kind in the United States.

Scott also has served as board chair for the Department of Information Resources. He has law offices in Fort Worth and Austin.