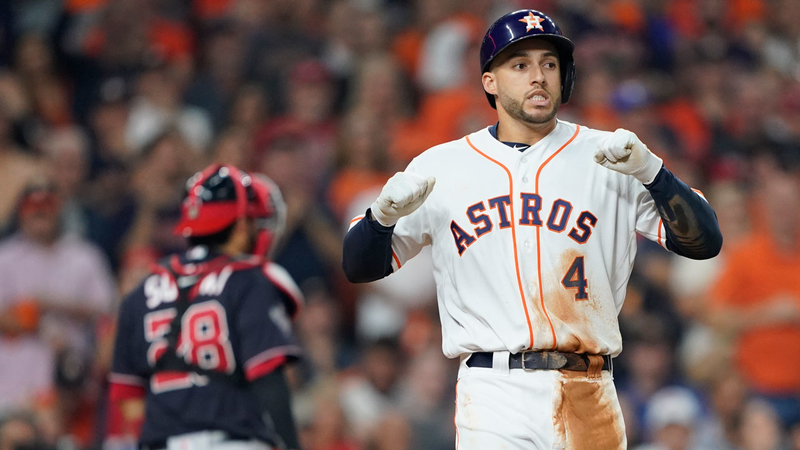 Astros fall to Nationals in Game 1

HOUSTON, Texas (KTRK) -- Despite a record-setting night by George Springer, the Astros fell to the Nationals 5-4 in Game 1 of the World Series Tuesday night.

The Astros defense faced early trouble after Cole allowed a lead-off base hit by Trea Turner, who then stole second base. But in 10 pitches, the unstoppable ace induced a bunt popout and two strikeouts to end the side.

The Cole Train has MMP rocking. Cole 10 pitches. Back to back K’s to end T1st. #TakeItBack @abc13houston

After Springer led off with a full-count walk, Jose Altuve picked up where he left off from his ALCS heroics, sending a line drive to left field. Michael Brantley took a strikeout, but during Alex Bregman's at-bat, Springer pounced on third base on a Scherzer wild pitch. Bregman struck out, but Altuve was able to safely steal second.

The next batter, Yuli Gurriel, made Scherzer pay on a fastball in the zone for a double to deep left-centerfield, scoring Springer and Altuve. Astros took the early lead, 2-0. The Nats retired the side with a strikeout of Carlos Correa.

Yuli does it again. 2 run double off the wall. 2-0 #Astros #TakeItBack

#Astros give Cole a 2 run lead and they’ve ignited the loudest crowd in baseball. 1st inning gets an A+#TakeItBack

The Nationals got on the board with a solo homer to center by Ryan Zimmerman, who is a member of the team since the Expos moved to Washington in 2005. The Astros lead was cut, 2-1.

Yordan Alvarez led off the home half with a walk, before Martin Maldonado flied out to right and Josh Reddick popped out to the shallow outfield. Springer battled to a full count but struck out on a check swing.

The Nats threatened, beginning with an Adam Eaton single and a marathon at-bat by Lamar High and Rice University alum Anthony Rendon, who flied out to deep left-center to end the half-inning.

Brantley got on base with a drive to right. He advanced to third when a pop up double by Gurriel dropped out of the reach of Washington's Victor Robles. Correa, though, struck out to end that threat.

Washington's Juan Soto, who is 20 years old, took Cole to the train tracks with a solo bomb. The game was knotted up at 2-2. A Zimmerman strikeout retired the side.

Alvarez led off with a base hit up the middle. Josh Reddick flied out but not without controversy beforehand. Reddick should have taken first base off of a catcher's interference swing.

Solid contact will do wonders for Yordan Alvarez. Snaps a 1-27 skid. He’s been on twice tonight. #Astros #TakeItBack

AJ is steaming. You don’t see that on the outside very often. #Astros #TakeItBack

After a Springer walk on two outs, Altuve worked to a full count, but grounded out to end the threat. At this point, Scherzer was at 96 pitches in four innings of work, compared to Cole's 57 in the same time frame.

Nationals and Scherzer survive 4th. #Astros leave two on. Scherzer up to 96 pitches thru 4. #TakeItBack @abc13houston

Kurt Suzuki led off the fifth with a walk, the first issued in the game by Cole. That followed a Robles base hit with no outs. Eaton then drove in a run with a hit to right. Astros fell behind, 3-2.

Soto's fly off the scoreboard in left drove in two more runs. The Astros' hole deepened, 5-2. The inning ended with a diving catch by Correa.

6TH INNING
Asdrúbal Cabrera singled to start the sixth but was erased when Zimmerman grounded into a double play. Cole then retired Suzuki for the third out to wrap up a clean inning after giving up four runs combined in the previous two.

Patrick Corbin took over for Scherzer in the bottom of the sixth and promptly struck out Correa before rookie Alvarez singled to right field. But Corbin struck out Maldonado before pinch-hitter Aledmys Díaz grounded out to end the inning.

Scherzer allowed five hits and two runs with seven strikeouts. He threw 112 pitches, which were his most this postseason.

7TH INNING
Springer greeted Tanner Rainey with a home run leading off the seventh inning, cutting the Houston Astros' deficit to 5-3 against the Washington Nationals in the World Series opener.

Springer set a record by homering in his fifth straight World Series game, breaking a record he had shared with Lou Gehrig and Reggie Jackson.

Houston loaded the bases when Rainey walked Brantley and Bregman with one out, and Correa reached on a two-out single to shortstop off Hudson.

Hudson then struck out Álvarez with the bases loaded.

8TH INNING
Washington held on to a 5-4 lead after eight innings in its first-ever World Series game, after getting all its runs in the first five innings against Cole.

Houston scored in the seventh and eighth innings off the bat of Springer.

Pinch-hitter Kyle Tucker led off the Astros eighth with a single off Hudson, then moved up to second when Diaz had a towering deep flyout to center field. Springer, their leadoff hitter who hit a solo homer an inning earlier, then got an RBI double on a ball that nicked off the glove of a leaping Eaton right up against the angled wall in right-center.

Altuve then flew out to right field before left-hander Sean Doolittle came on and got Brantley on an inning-ending liner to left field.

Cole hasn't lost since May 22. The right-hander, who went seven innings, came into the game after winning 19 consecutive decisions over his last 25 starts.

ESPN 97.5 FM is proud to carry every World Series game on the radio. Listen in Houston and join the conversation with ESPN Houston's local lineup from 7 a.m. to 7 p.m.