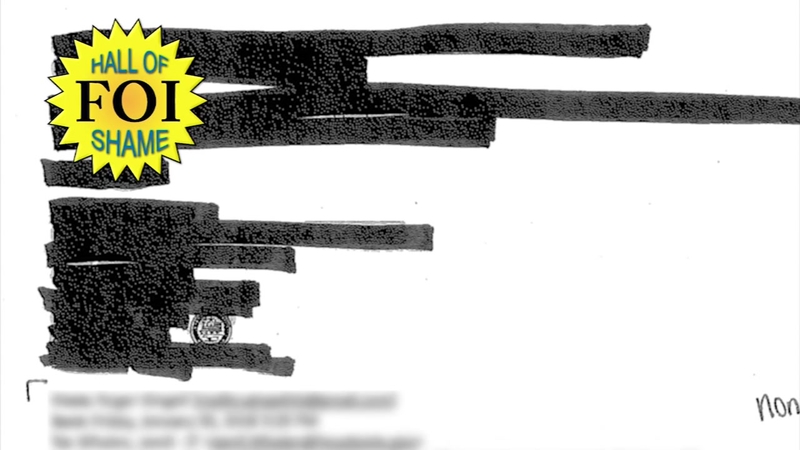 Who makes it in the 13 Investigates Freedom of Information hall of shame?

HOUSTON (KTRK) -- One of the great freedoms we have in this country is being able to report freely the activities of those elected to govern us.

And it's a guiding principle written into the constitution, federal law, and Texas state law.

Because "the people... do not give their public servants the right to decide what is good for the people to know and what is not good for them to know," we get to take a look at or get copies of any document used by the government to govern.

But there are some government agencies that need a lesson in just that. Over the last year, they've earned a spot in the ABC13 Investigates Freedom of Information Hall of Shame.

We'll start in Katy, where the normally quiet school board there had some fireworks of its own this year.

In the midst of a decades-old bullying battle concerning the school superintendent, we found Dr. Lance Hindt was blocking a number of people on Twitter, including ABC13 reporter Shelley Childers. Who would block Shelley?

Not Katy ISD anymore. Katy ISD called it inadvertent though said it reserves the right to block anyone. We say it earns them a spot in the Hall of Shame.

And before we leave Katy ISD, we put an asterisk on their plaque after discovering they tried to make up fees to pay for public information that aren't authorized by state law.

After Harvey, we began asking agencies for information about how they handled the storm. We expected a flood of documents when we asked the San Jacinto River Authority about its role in opening up the gates at Lake Conroe. Instead, we got a lawsuit against the state from the SJRA asking to keep the documents secret.

The state is now asking a judge to dismiss the case and force the SJRA to hand over documents to us.

A press secretary who doesn't want to talk to the press is certainly worthy of a spot in the Hall of Shame and that leads us to Darian Ward.

She's the now-former press secretary for Houston mayor Sylvester Turner. She cemented her place in the Hall after trying to hide thousands of city emails she sent or received while apparently trying to run a private business in her city office on city time.

Houston First, the city's tourist and convention arm, tried to keep employee salaries secret for years, claiming they were paid by a shell company, not public funds. It didn't hold up to scrutiny and Houston First was forced to turn the salary information over, but not before bungling their way into our Hall of Shame.

But our vote for the Hall of Shame MVP is the city of Houston itself, which kept secret the city's rules on how it handles (this is not a joke) public information requests.

The city claims part of it is attorney/client privileged information.

We claim it's worthy of a top spot in the Hall of Shame.

Texas law makes most documents government employees create public. That means reports, emails, bills, powerpoint presentations, spreadsheets, letters, memos, text messages, salary lists are all public documents. You can ask for them all. There are several exceptions agencies can use to withhold information. We get hit with an exception about half the time - sometimes you can negotiate and find a solution.

- To begin to decide what you are asking for. Agencies don't have to create a report for you, but most information is usually releasable in one form or another.

- If you are uncertain if an agency keeps what you are looking for - call and ask. Usually, we ask to speak to the Public Information Officer or Records Custodian. Remember they are people too and deserve to be treated with respect; they're usually not trying to hide something. Many times, I ask records people, "I am trying to get (X), what is the best record to ask for?" Sometimes they answer, sometimes not.

- There is no statewide form to do this - usually, an email should work. Here is the basic structure:

Dear Records Custodian -
Under the terms of the Texas Public Information Act, I am requesting copies of (or an inspection of):

List what you are asking for - include date ranges and types of documents you want.

Please send them to me at (this address).
You may call me at (phone number) with any questions.
Thank you,
Your name

- You may have to pay something and that's not illegal. You are allowed to ask what you are paying for and it should be reasonable.