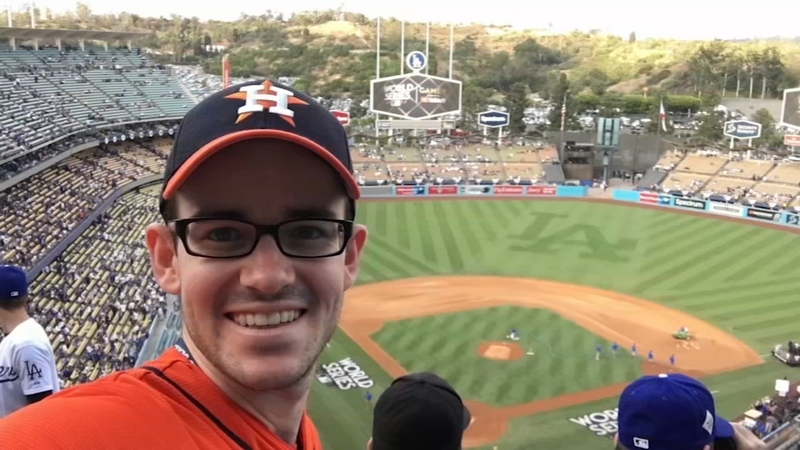 An opportunity to watch the Astros win the World Series at home is enticing fans from across the world to see the game.

When the Astros were named champions two years ago, Will Harrel was in the stands.

ONCE IN A LIFETIME: Astros fans are traveling distances for an opportunity to see the team win it all at home. This fan flew from London. His story on @abc13houston at 6pm. Are you wearing #Astros gear? Let’s see those outfits! #TakeItBack https://t.co/or2TU9zdGR pic.twitter.com/IYsXkGZzkS

"It was really amazing to be there and be a part of it," Harrel recalled. "I actually managed to find a section with a lot of Astros fans."

That victory was on the road. The Astros clinched the 2017 title against the Dodgers in Game 7.

With the Astros having two shots to take it back at home, Harrel knew he had to be at Minute Maid Park.

"It was cool to be around a dozen or so fans, but it'll be so much cooler to have 40,000 people all cheering together," said Harrel.

This time, it wouldn't be as easy. The Astros fan recently moved to London.

"I spent a lot of time trying to figure out the most cost effective way," Harrel explained. "I wasn't very successful, but I used some miles, or otherwise it would've been more expensive than the World Series tickets."

Harrel hopes the money will be worth it. No matter the case, the fan says he's just happy to be back in Houston watching the World Series, because following the games from London isn't easy.

Being an Astros fan is difficult for another reason, he says. In London, according to Harrel, there aren't many baseball fans and explaining the playoff process isn't easy. But they all know what a championship is, which is something Harrel hopes to brag about when he returns.