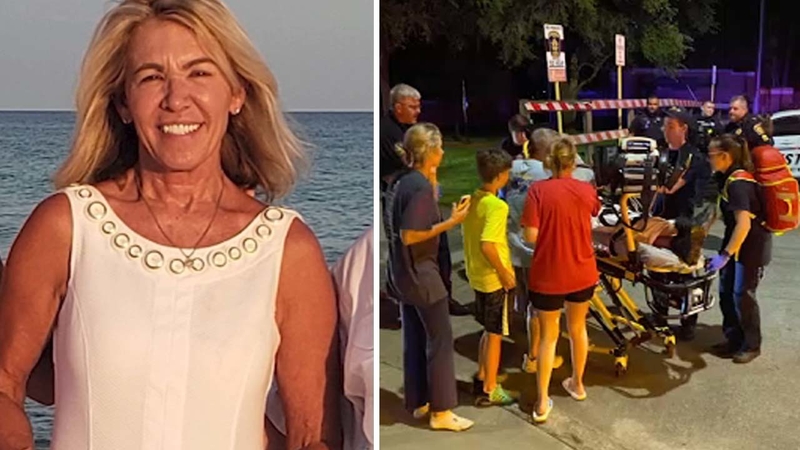 KATY, Texas (KTRK) -- Sherry Noppe, the 63-year-old grandmother who has been at the center of an intense search since earlier this week, was found safe Friday morning, Harris County Precinct 5 said.

According to officials, she was found at about 3 a.m. "by a group of tireless volunteers and deputies who were alerted by her dog, Max, barking in the woods."

Constable Ted Heap is relieved to report Sherry Noppe, missing since Tuesday, has been found in George Bush Park. She was located at approx. 3am Friday by a group of tireless volunteers and deputies who were alerted by the sound of her dog, Max, barking in the woods. #hounews pic.twitter.com/ZKOOjldJ94

She was seen on security camera footage walking on Sparrows Ridge Drive near Pattison Elementary in Katy. Since then, no one had heard from her.

Her family believed she was likely walking along a trail behind her neighborhood to George Bush Park, where she was ultimately found three miles away from when she was last spotted north of the park.

Her son said she had mild dementia and left the house without her cellphone.

Texas EquuSearch launched an operation to find Noppe at George Bush Park on Wednesday, and the search continued Thursday until the afternoon, when it was suspended due to weather.

Volunteers and search crews returned to the area Friday morning.

The family credited Noppe's dog, Max, for staying by her side through the whole ordeal.

ABC13 spoke to volunteers who helped search for the 63-year-old mother who went on a walk with Max Tuesday afternoon and never went home.

"It's a small miracle that she's alive after being missing for so long," said Constable Ted Heap in a tweet. "Our concern now is getting her out of the woods and to a hospital for a medical evaluation. Thank you to Texas Equusearch and the army of searchers who never gave up."

Ramona Brown, another volunteer, helping in the search, said she had a strong feeling Noppe was in the search area.
Brown says volunteers, including a woman with a drum, continued searching even in the rain.

"There was a lady, she had a drum, and she said, 'The dogs respond to this drum,'" Brown said. "She was right here where we're standing. When she started playing the drum, the dog barked once only once. So, we all called 'Max' for what? Five hours?"

According to friends, she was alert and talking but cold and covered in mud.

She was lying in a marshy area, several feet from the main trail.

When she was found, Noppe was in the park as storms rolled through Thursday afternoon.

"Us and police had heard some dogs barking faintly here and there, so we just kept listening for that," said family friend Michael England. "We were happy to find her. Happy that she is alive and healthy. The dog was there. Everything was good. I mean, the dog saved her life."

Noppe is at home with her family recovering. Max, was checked by a veterinarian and is at home and safe.

"It's a small miracle that she's alive after being missing for so long," said Constable Ted Heap. "Our concern now is getting her out of the woods and to a hospital for a medical evaluation. Thank you to @TexasEquuSearch along with the army of searchers who never gave up."