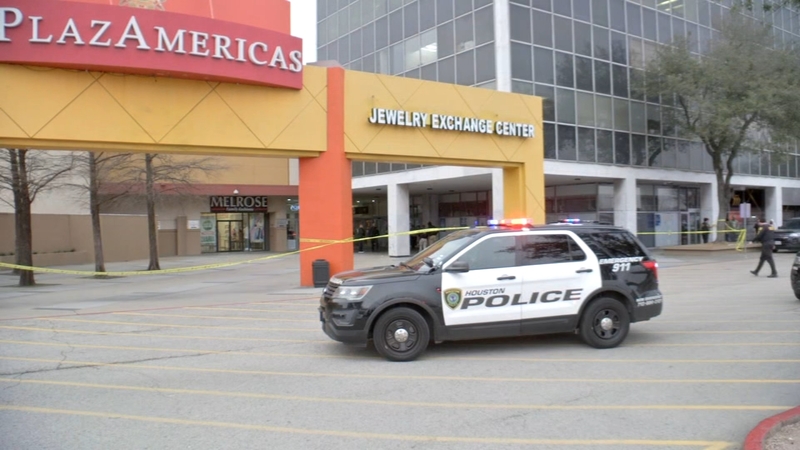 HOUSTON, Texas (KTRK) -- A San Jacinto County Precinct 1 constable deputy was shot and killed while working an extra job at a mall in Sharpstown on Wednesday, according to Houston police.

Neil Adams was killed in a shooting just before 4 p.m. at the PlazAmericas mall in the 7500 block of Bellaire Boulevard, according to Houston police.

During a press conference Wednesday night, HPD Chief Troy Finner said Adams was working an off-duty job at the mall when there was an altercation with the suspect, described as a 35-year-old man.

"He's a hero. He's a hero and we want to honor him," Finner said of Adams.

The suspect managed to wrestle the deputy's gun away and shoot him with it, investigators said. Adams was taken to the hospital, where he later died.

Police said an altercation ended with the deadly shooting of the deputy. The suspect was later shot by two police officers and died at a hospital, Chief Troy Finner said.

The suspect then made his way to the food court, where he was found by two HPD officers who had been called for an officer assist.

Investigators said that's when the suspect threatened them with a sharp object, and both officers fired their weapons. The suspect, whose identity has not been released, later died at the hospital.

Dee Dee Adams bravely spoke out and asked for prayers for all law enforcement officers, just a few hours after her husband was shot and killed. Dee Dee is the San Jacinto County Treasurer.

"My husband always said you can either be a sheep or a sheepdog and I want everybody to pray for all the sheepdogs out there that are protecting everybody," Dee Dee said. "They get a bad rap and they just want to protect. That's what they want to do in their heart. Everybody's turned their back on them and everybody should pray for all of them because they're here for you."

It is unclear what exactly sparked the initial altercation between the deputy and the suspect.