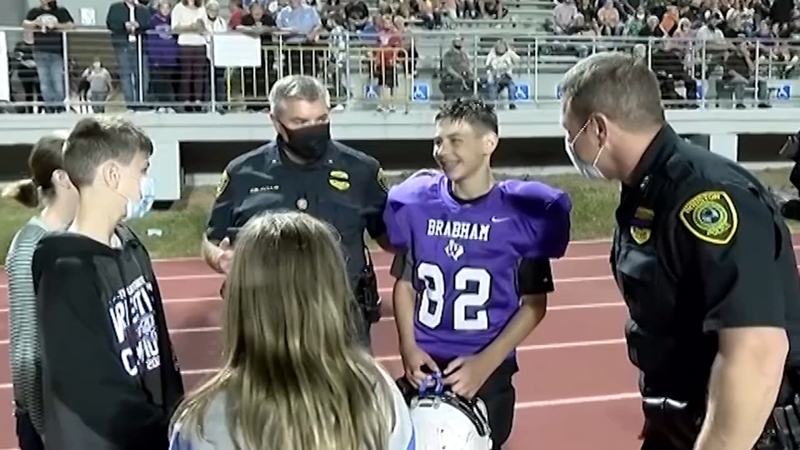 WILLIS, Texas (KTRK) -- The son of an HPD sergeant shot and killed received a warm surprise one day after his father's sudden death.

The young boy, who is on the Brabham Middle School's junior varsity football team in Willis, was slated to play a game on Tuesday. To make sure the boy didn't face the game alone, several HPD members attended the match up to show support for the family of Sgt. Sean Rios.

Rios was killed Monday afternoon in the 7900 block of the North Freeway after police say he engaged a suspect in a gun battle.

The Assistant Chief of Homeland Security for HPD Larry Satterwhite along with other HPD personnel attended the game, which included a special helicopter flyover for Rios.

"We just wanted to honor the family," said Satterwhite. "Sgt. Rios was an awesome guy. He was always out there trying to make a difference, always trying to help. [It's] tragic that we lost him."

During an afternoon briefing on Monday, hours before the game, HPD Chief Art Acevedo held back tears as he spoke about the young athlete.

"We didn't want him to be alone and we wanted to have his commander and his chief stand in place of his father watching him play," said Acevedo.

A visibily emotional HPD Chief Art Acevedo nearly breaks down in tears when he talks about the family of fallen Sgt. Sean Rios.