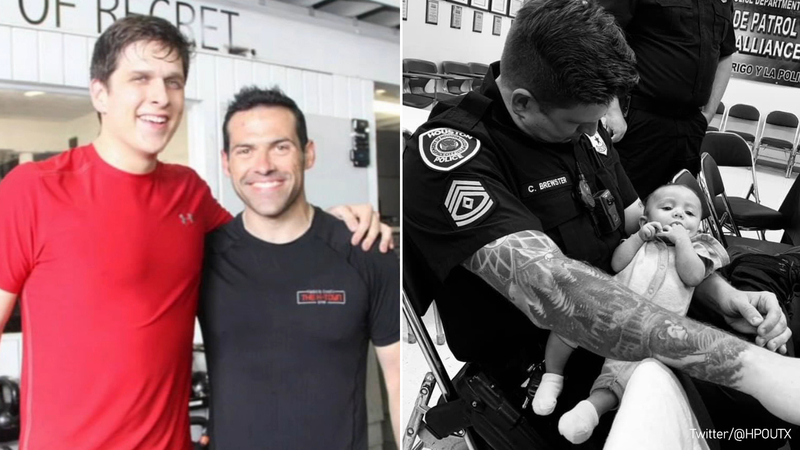 Remembering Chris Brewster: An officer and an athlete

HOUSTON, Texas (KTRK) -- Sgt. Chris Brewster was lauded as a hero by HPD Chief Art Acevedo, who promoted him to the rank in February, "as a doer, rather than someone who just sits behind a desk." Those are the ones he said who make a difference.

Acevedo worked through his tears as he remembered Sgt. Brewster, who was killed in a shooting Saturday night.

"I'm not surprised he was leading," said Acevedo. "The best of the best are the ones that get killed because they're the ones that don't wait."
Brewster's friends say there was no one better to have their back. Brewster was tall and athletic, and spent his spare time at H-Town Crossfit gym in Houston's west end. It attracts firefighters and police officers who want to be fit to better do their jobs.

"He made me look short," said owner Theo Tsekauras, who hired Brewster as a coach at the gym, where he would work when he was off shift. "It was something that came naturally for Chris. He liked being around people and his ability to serve the population to the extent that what he did was a natural extension of Chris. He enjoyed doing what he did."

"My last memory of him was when I was running along Houston Avenue. He was coming by in his patrol SUV, and rolled down the window and yelled, 'Go Amanda' as I was on my run, and he was encouraging when he didn't have to be," said Amanda Schnell, who also coaches at the gym.

At only 32, he had his life ahead of him, with a wife to share it with, until he was fatally shot in east Houston. His accused killer is jailed without bond.

Brewster graduated from Dobie High School in the South Belt area, and grew up attending Sagemont Church, the third generation of his family to be part of that church. He was also involved in the Youth Ministry and played in a church youth band.

On Sunday, the congregation was asked to pray for the Brewster family, which includes his wife, his parents and his sisters. "This hits really close to home," the pastor said. "Please pray for them. It's very hard, and we know and love him so much."

Acevedo recalled just nine months ago when he promoted Brewster to sergeant. Brewster was assigned to the patrol and Gang and Major Offenders Divisions.

Acevedo said Brewster has always been a leader who wanted to save everybody. He later tweeted that Brewster was a hero with an infectious smile who loved his family, friends, co-workers and community.

After a long and terrible night. I am finally alone at home reflecting about the loss of @houstonpolice Sergeant Chris Brewster, a hero through & through. I will always cherish his infectious smile & his love for his family, friends, co-workers & community.

Police Union President Joe Gamaldi shared his sentiments on the death of Brewster, stating that before he became a sergeant, he was a member of an elite unit in HPD.

One of our fellow Houston Police officers shared these heartwarming photos and this post. Sergeant Christopher Brewster was a loving husband, a caring friend, and a servant to his community. We will miss you, Chris. Rest In Peace, brother. We will see you again one day. 🌹 pic.twitter.com/m4Fz9F6T2V