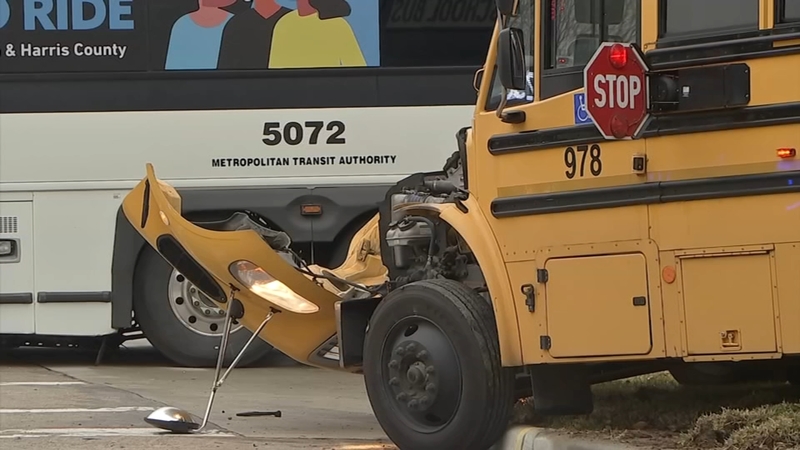 KATY, Texas (KTRK) -- At least four people were injured in a school bus crash in the Katy area Tuesday morning.

A Katy ISD school bus collided with a METRO Park and Ride bus around 7 a.m. Tuesday in the 2100 block of Kingsland Boulevard at Mason Road.

According to Katy ISD, one adult from the school bus was taken to Memorial Hermann Hospital via Life Flight.

Two students were taken to the hospital with non-life-threatening injuries, Katy ISD said. Their ages and what school they were on the way to were unknown.

In total, there were five children on the school bus at the time of the crash, METRO police said. There were no passengers on the METRO bus, but the operator was taken to the hospital.

There was no word on the severity of any of the victims' injuries.

It is unknown what exactly led up to the crash. Harris County Precinct 5 constable deputies are investigating the crash.

"This morning at approximately 7 a.m., there was a traffic accident involving a Katy ISD school bus and a METRO bus at Kingsland Boulevard and Pickford Drive.

Harris County Precinct 5, Katy ISD Police and EMS responded to the incident. A Katy ISD bus attendant sustained an injury and was taken by Life Flight to a nearby hospital. Additionally, two students sustained non-life-threatening injuries and were transported to the hospital out of an abundance of caution.

The remaining students on board the bus were released to their parents or transported by another bus to their campuses."