'Because I would want someone to do it for me': Man details quick-thinking to pull deputy from wreck

Johnny Walker, a homeless man who was in the area doing some work, jumped in to help pull the deputy from the fiery wreckage.
KTRK
By Courtney Fischer 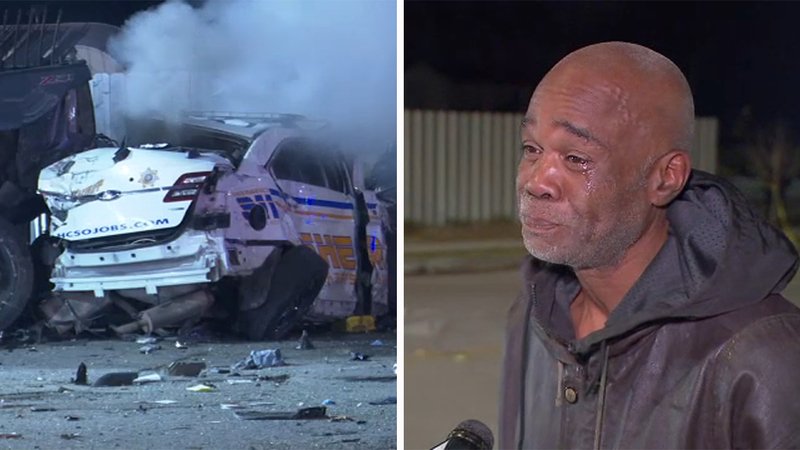 HOUSTON, Texas (KTRK) -- Good Samaritans came to the rescue when a deputy got into a crash with an innocent driver overnight during a chase involving a robbery suspect.

An innocent woman was killed and two young children and the deputy are now in the hospital.

ABC13's Courtney Fischer met a homeless man at the scene of the crash who selflessly jumped in to help rescue survivors from the wreckage.

"I'm homeless. I was doing some work for someone. I was taking some tools back when I heard 'boom, boom, boom, boom, boom,'" Johnny Walker recalled. "I ran out here to see what it is and I saw a lot of cars, but I paid attention to the fire. My instincts were to go to that car and help him out, because he was crushed in on both sides."

Harris County Sheriff Ed Gonzalez said that at about 10:42 p.m. deputies were responding to a call of an aggravated robbery at a CVS in the 10800 block of the Eastex Freeway and Tidwell.

Authorities say a sheriff's deputy saw a man leaving the CVS wearing a mask and getting into a car that matched the description he heard on the scanner.

When the deputy tried to stop him, the man kept going, sparking a pursuit.

Gonzalez says that shortly after, the deputy called in that they were chasing someone. By 10:52 p.m., the deputy's radio went silent.

According to Houston police, the deputy chasing the suspect got into a crash with a black car on Laura Koppe and Lockwood in northeast Houston. Five more vehicles were hit.

The innocent driver in the black car was killed. The vehicle was carrying two children, a 2-year-old and a 5-year-old. Authorities say the 5-year-old is in critical condition, and the 2-year-old is stable.

"I think I was at the right place at the right time, being homeless," Walker said, through tears. "I tried to help that lady. She passed though."

The crash was so violent, a child is in critical condition and good Samaritans had to pull a deputy from his vehicle while the suspect pursued in this is on the run.

After the crash, the deputy's patrol car briefly caught fire.

"I thought it was going to blow up," Walker recalled. That's when he said he knew he had to do something.

"Nobody was trying to make an effort, so when I went on one side, couldn't get in. I jumped over the car, two more youngsters came and jumped behind me," Walker said. "We pulled him. I opened the door and got him out. We picked him up, put him over the car, took him inside the store."

Surveillance video obtained by ABC13 also shows the deputy's unit slam into parked cars in the parking lot of a store. There's a lot of fire and smoke, and at one point, you can see a group of people appear to carry someone into the store. That was Walker and the other good Samaritans.

An HCSO deputy's car erupted into a fireball as a chase came to a violent end. The raw footage shows the frantic efforts to save the deputy in the aftermath.

"He came to when we were checking his pulse. I kept talking to him, 'Stay with us. Help is on the way,'" Walker recalled.

"How do you tell someone in a moment like that? How do you have the clarity and level-headedness to keep him calm and tell him help is coming?" Courtney asked.

"Because I would want someone to do it for me," Walker said, as he started to get emotional. "I'm just disappointed we couldn't help someone else."

"It's emotional being out here. I can see it in your eyes. What are you thinking?" Courtney asked.

"I just wish I could have done a little more," he replied. "When you have kids and family, even if you don't, it's just a critical point in time. It's not about color, it's about helping one another."

The deputy was taken to Memorial Hermann Hospital. Three other adults were also transported for treatment and evaluation.

"Johnny -- you did all you could being out here, though," Courtney replied. "You did help save a deputy's life."

"Sometimes you have to make a choice. That car was on fire. I could lose my life," Walker recalled. "I didn't know who was in the other car. My heart just goes out to them and their family."

Since Eyewitness News' interview with Walker, ABC13 viewers have reached out about helping him. On Thursday afternoon, his family also came out to the public, saying they were searching for him and that they credit this report with helping reunite with their loved one.