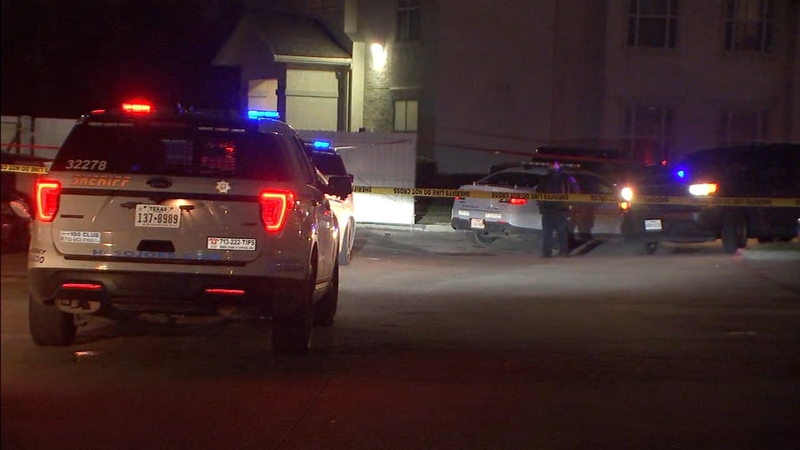 HARRIS COUNTY, Texas (KTRK) -- A suspect was shot and killed in a deputy-involved shooting Christmas morning in north Harris County.

The shooting happened just before 5 a.m. Friday at an apartment complex on Aldine Bender near Sequoia Bend, which is near the Eastex Freeway and the Beltway.

Officer-Involved Shooting 5000 blk of Aldine Bender: One adult male has been confirmed on scene. No injuries to the deputy. pic.twitter.com/wquzR53ve7

According to Lt. Robert Minchew with Harris County Sheriff's Office, one deputy responded to the apartment complex Thursday around 10:20 p.m. for a family disturbance/terroristic threat call.

Minchew noted that the deputy involved was alone, with other deputies involved in other calls.

The 31-year-old suspect was reportedly threatening his ex-girlfriend, saying he was going to shoot up the apartment, Minchew said. Deputies say the suspect has a history of family violence.

"His history goes back prior to the pandemic. I believe he has a charge for impeding breath, which is assault/family violence, where you actually choke someone. He has an open warrant, a harassing/stalking-type charge," Minchew said. "He has not been with this woman for six months I'm being told. He's still harassing her, stalking her. We're just glad she's OK and the officer is OK."

By the time the deputy arrived, the suspect was gone. He returned Friday morning, which is when the shooting occurred.

Minchew said the deputy returned to the scene, hoping to arrest the suspect on a terroristic threat charge. He also had warrants for harassing communications with the same ex-girlfriend, HCSO said.

When the deputy walked up to the apartment, the suspect pulled out a gun and fired multiple rounds, even after the deputy told him to drop his weapon, Minchew said.

The deputy returned fire, shooting and killing the suspect in the breezeway of the apartment.

According to the sheriff's office, the deputy is a two-year veteran with HCSO, with only six months on patrol.

There were two women inside the apartment at the time of the shooting, according to Minchew.

Minchew said the deputy was wearing a bodycam during the shooting and the footage was taken to be downloaded for investigation immediately.