KTRK
By Mayra Moreno
HOUSTON, Texas (KTRK) -- The roof of a grocery store in the South Union area of southeast Houston collapsed during a fire Friday.

SkyEye captured the collapse during the early evening just as firefighters responded to a business with "Jim's Super" on the awning.

According to Houston Fire Department, a call of the fire came in around 5:30 p.m. in the 4700 block of Yellowstone Boulevard near Calhoun Road. HFD added the fire was declared defensive within about 15 minutes with a report of a collapse.

On the ground firefighters doused the building with water trying to gain control. It was all hands on deck, with the community in disbelief.

One of the owners, Karen Huynh, was in complete shock. She said it was her manager who saw smoke inside and acted quickly, getting everyone out and calling 911. She's glad everyone is OK, but it's still hard to see their long-time family business destroyed.

"The whole building is collapsed. It's heartbreaking to see that there is nothing left. We worked really hard to build it up. Now, it's gone in matters of seconds. Just completely gone," she said.

Aside from possibly losing her business, Huynh worries about the community too.

"Another thing that concerns me is that this is a community-based grocery store, so a lot of people who come here by foot. They take the bus. People who can't travel come here to buy groceries," she said.

On Monday at 1 p.m., the Houston Food Bank along with congresswoman Sheila Jackson Lee will host a food giveaway to help people who relied on the store for their groceries. The focus will be on those shoppers who typically walked to Jim's to get their items.

Council member Carolyn Evans-Shabazz said she will ask Metro about the possibility of providing shuttles to the closest H-E-B stores.

They hope to rebuild, but right now, it's too soon to tell.

To that point, the fire department has already had a busy Friday. Earlier in the day, crews battled a three-alarm fire at a southwest Houston business that was making hand sanitizer. 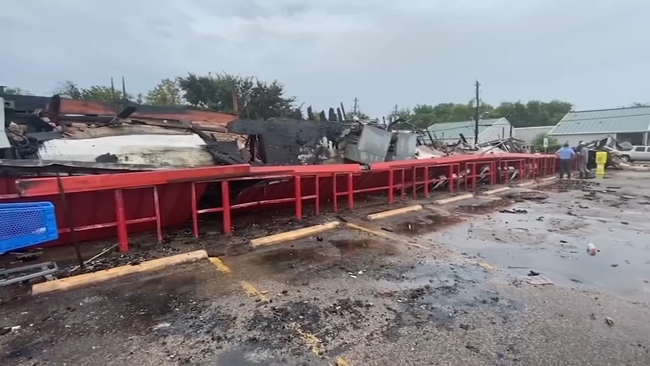 Cause of massive fire at Jim's Super in SE Houston released