Single mom left stranded after car was stolen from her home 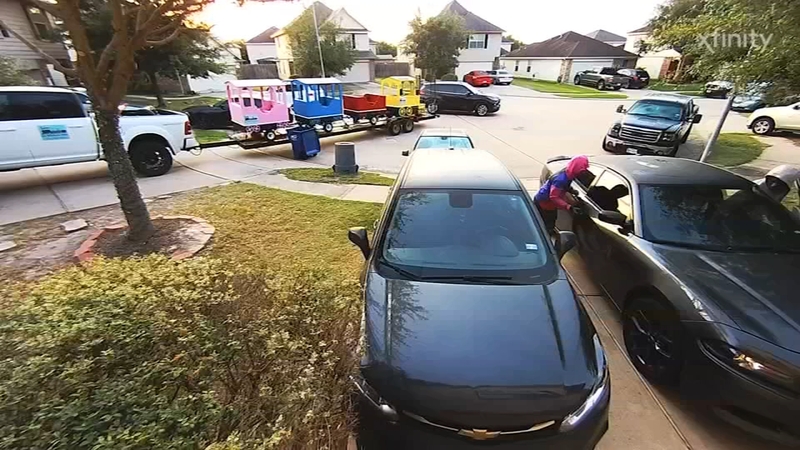 KATY, Texas (KTRK) -- A Katy mother wants help catching a group of teenagers who she says stole her car -- leaving her and her 3-year-old son, who is non-verbal and has autism, without transportation -- and that's not the worst part.

Ashley Davis told ABC13 she calms her 3-year-old son by taking him on car rides, so it's not just her family's means of transportation, it's also how they function daily.

Surveillance video shows the thieves in the neighborhood around 5:30 a.m. Sunday, May 15.

The video shows a group of what appears to be teenagers pulling on every door on Stockholm Court before they get spooked by a dog.

The suspects left, and then a short time later, two of them were dropped off by a black SUV.

The video shows them walk right up to the woman's car and drive off.

"These guys had multiple weapons on them. They were getting chased by a dog," Davis said. "They ran up on my car and were looking back at my house with a gun and looking at the street, as if someone came out of my house. Y'all were willing to kill us."

Through tears, Davis told ABC13 that her son looks for her car every day.

She admitted that the keys were left in the car overnight with her purse and their clothes after her son was upset, and she got distracted trying to calm him.

When they found it, the thieves inside slammed into the wrecker truck, Davis said. Now, the lot says she must pay for the damage to the car and the wrecker.

"That's just my way of getting us some peace. At any moment, I can take us on a car ride to calm him down. I can't do that. I don't have anything," Davis said. "They took everything. And even with y'all having everything in my car, y'all came back. It's the fact that you guys came back that scares me the most."

Officials found several items inside the car that did not belong to Davis, including I.D. badges to a local high school and middle school.

If you recognize the thieves or have any information that could help this family, you're asked to call the Harris County Sheriff's Office.