Houston road rage: Man wanted after mom says a driver pointed gun at her has been arrested

Photos and a paper plate connected Jesus Ruvalcaba to the April 30 incident on the South Loop.
KTRK
By Shelley Childers 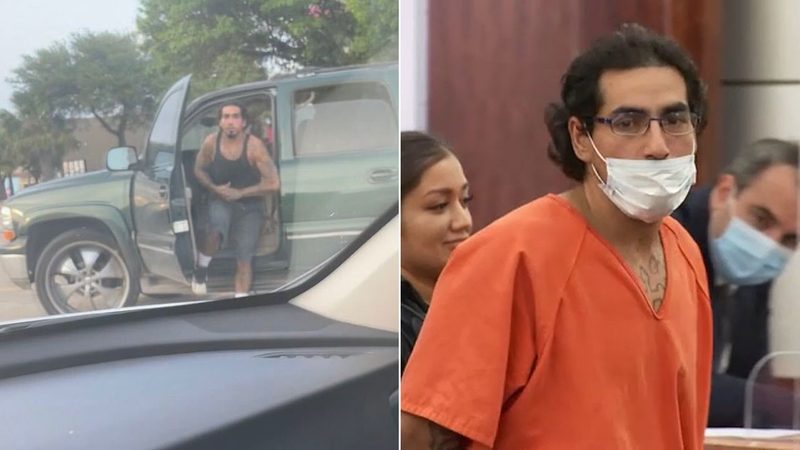 HOUSTON, Texas (KTRK) -- A mother and her 9-year-old daughter may be able to rest easy more than two weeks after a road rage incident that the mother says involved a driver hitting the back of her car three times and then later pointing a gun at her.

Jesus Martin Ruvalcaba, 34, was taken into custody after police were looking for him in connection with the April 30 incident on the South Loop westbound near the Stella Link exit.

Ruvalcaba appeared in a courtroom Monday morning for a felony count of aggravated assault with a deadly weapon.

Last week, the mother, who wanted to remain anonymous out of fear for her safety, told Eyewitness News her terrorizing story that she says lasted two miles.

ORIGINAL STORY: Man wanted for threatening gun on mother and child during road rage incident on 610

The woman said the suspect all of a sudden began honking at her as she was traveling on the left-most available lane in the area.

Then, she said she was moving from lane to lane in an attempt to get away from the suspect, but he followed her and rear-ended her car.

It was at that point, she says, that she called 911 for help and stayed on the phone with a dispatcher while the suspect followed her off the Braeswood exit and down S. Post Oak Road to a nearby Kroger parking lot.

"So when I exited the freeway, he exits off with me. I pulled up. He pulled on the side of me. He proceeded out of the car, and you can see him with the gun. He's cocking the gun, and he's pointing it at me. So I just smashed on the gas," said Doe.

The mother began taking pictures of the suspect as she sped out of the parking lot.

She was able to take down the man's paper plates on his green Chevy Suburban, which registered back to Ruvalcaba.

A search of his driver's license picture matched the pictures taken by the mother on her cell phone, court records said.

Ruvalcaba was charged eight days after the alleged incident. His court filing stated that he was twice convicted for two felonies in the past: a 2010 robbery case and a 2015 burglary of a habitation offense.