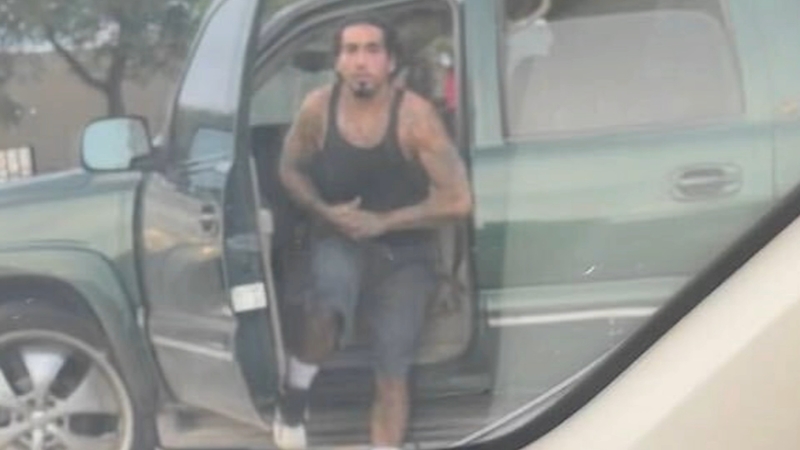 HOUSTON, Texas (KTRK) -- Houston Police are searching for a man who pointed a gun at a mother and her 9-year-old daughter after a road rage incident.

The incident happened on April 30 at the S. 610 Loop westbound near the Stella Link exit.

The mother, who asked us not to use her name to protect her identity while the suspect is still at large, says she was driving along when all of a sudden the suspect began honking at her.

She will be referred to as Jane Doe in this article.

Doe said she was moving from lane to lane in an attempt to get away from the suspect, but he followed her and rear-ended her car.

She says that's when she called 911 for help and stayed on the phone with a dispatcher while the suspect followed her off the Braeswood exit and down S. Post Oak Road to a nearby Kroger parking lot.

"So when I exited the freeway, he exits off with me. I pulled up. He pulled on the side of me. He proceeded out of the car, and you can see him with the gun. He's cocking the gun, and he's pointing it at me. So I just smashed on the gas," said Doe.

The mother began taking pictures of the suspect as she sped out of the parking lot.

Police were able to track the paper plates attached to the suspect's green suburban to a man named Jesus Martin Ruvalcaba. Court records say a search of his driver's license picture matched the pictures taken by the mother on her cell phone.

Ruvalcaba is now wanted for aggravated assault, and the victim is hopeful he will be arrested soon before his violent behavior escalates.