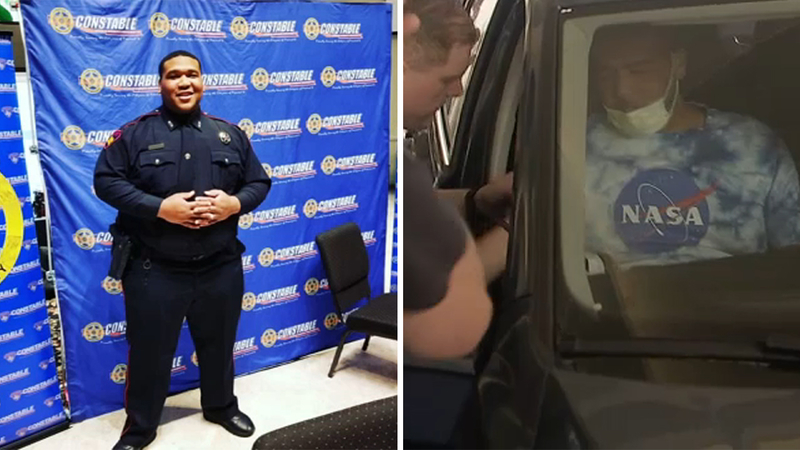 HOUSTON, Texas (KTRK) -- Today, a Harris County Precinct 4 constable deputy returns to full duty after he was shot outside of a nightclub in an ambush in October.

The ambush injured a second deputy and killed a third.

It has been a long six months to get to this point, but today will be a celebration for Deputy Constable Jaquim Barthen.

The shooting happened on Oct. 16, 2021 outside of 45 Norte Bar and Lounge in north Houston.

In total, three off-duty constable deputies were shot, and one deputy was killed.

All three were working security jobs when investigators said they were ambushed by a shooter in the parking lot.

Deputy Darryl Garret was injured and is still recovering in the hospital. Deputy Kareem Atkins was killed in the shooting.

The suspect in the shooting, 19-year-old Eddie Miller, is facing multiple counts including capital murder, attempted capital murder of a peace officer and aggravated assault.

At 2 p.m., Constable Mark Herman and other staff members at the Precinct 4 station off Stuebner Airline and Cypresswood Drive will welcome Barthen back to work. The public is invited to the event.

It was no easy journey for Barthen to get back on his feet. He endured months of medical procedures, surgeries and physical therapy -- all to be able to come back and resume his work as a deputy constable.

The three constable deputies were ambushed while working extra security jobs at a nightclub. Now a manhunt's underway for the shooter. Here's what we know.

A suspect has been arrested in the Oct. 16 shooting that killed Precinct 4 constable deputy Kareem Atkins and injured two other deputies at a club.

Lajah Richardson still has not told her fiancé, Deputy Darryl Garrett, that his best friend was killed because she fears the news will jeopardize his recovery.

Loved ones on Harris County Pct. 4 deputy killed: 'He truly was, what a father is'
EMBED More News Videos