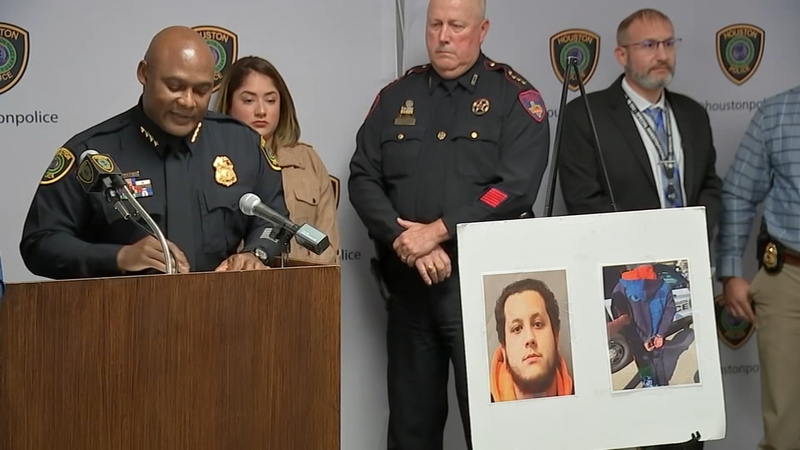 HOUSTON, Texas (KTRK) -- A 19-year-old is in jail after a Precinct 4 deputy constable was killed and two other deputies were shot during an ambush attack at a north Houston nightclub back in October.

"I mean, it's two months later," said Nadia Atkins, Deputy Atkins' widow. "I think for a second there, we were a little worried. But this is a huge win for us. And we're just so grateful for everybody up here for all the hard work that was put in, and that justice has begun."

In court on Monday, Miller, who authorities arrested using the fallen deputy's handcuffs, was given no bond for the capital murder charge.

"You kill one of our officers, we will arrest you," said Houston police Chief Troy Finner, who joined Nadia, as well as a number of law enforcement officials to announce the arrest on Monday afternoon. "I'm just amazed at the work they have done, and really, I know it seems like a long time, but it's been a short time toward the obstacles (investigators) were up against."

Leaders of multiple Houston-area law enforcement agencies rallied behind the widow of a murdered deputy constable killed in an ambush shooting. A 19-year-old is accused in the killing.

On the night of the incident, police initially said they had a suspect in custody. The next day, authorities said that after interviewing the individual, they did not believe the person was the shooter. Now, nearly two months later, police confirmed they made an arrest.

"I was a praying man before," said Precinct 4 Constable Mark Herman as he thanked investigators. "But every night when I fall to my knees and say a prayer, I've been saying an extra Hail Mary to our Father for these families."

The three deputy constables were working security at 45 Norte Bar and Lounge on Oct. 16, according to investigators, when all three were ambushed by a shooter while trying to arrest another person in the parking lot.

Deputy Atkins was fatally shot and killed. He was just 30 years old.

Deputies Darryl Garrett and Juqaim Barthen were both injured, but survived.

Garrett was shot in the back multiple times and had undergone surgery. Nearly two months after the incident, family members say he is still in the hospital recovering.

In addition to working together, loved ones said the three deputies had a bond like brothers.

"They did everything together," said Lajah Richardson, Garrett's fiancée.

RELATED: 'They called each other brothers': Fiancée of critically injured Pct. 4 deputy speaks

A family friend of Atkins vowed to keep his memory alive.

"He was so happy. He truly was what a father is," said former boss and close friend of Atkins, Jimmy Vitela. "He was excited about the newborn and his 2-year-old just had her birthday"

Full Processional: Deputy Kareem Atkins' body was surrounded by his fellow brothers and sisters in blue as they transported him from the Harris County Medical Examiner's office to the Klein Funeral home. Atkins was shot and killed at the 45 Norte Bar and Lounge during an ambush Saturday.