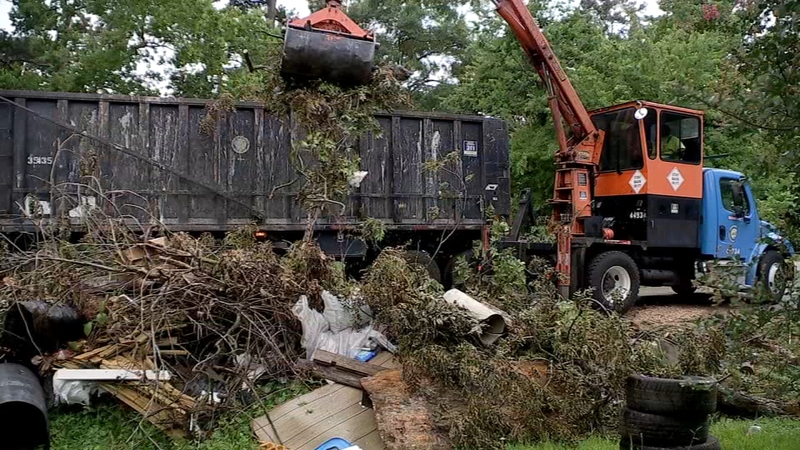 HOUSTON, Texas (KTRK) -- A homeowner on Houston's northeast side was so embarrassed by the huge trash pile in front of her house, she stopped asking friends to come visit.

After months of waiting on the city to do its job, she finally turned to Ted.

Standing on her front porch trying to see over the massive trash heap that blocks a view of her neighbor's home, she told Ted Oberg, "I didn't want anybody to come to my house because I was so embarrassed about all that trash out there, and it is not necessary."

When ABC13 Eyewitness News arrived at her home, the trash pile was more than six feet tall, and as long as three car-lengths.

It didn't start that way. Lacy shared photos from months ago, when she says she first called the city begging for a pick up, and it was a more manageable size.

"It's just getting larger and larger," said Lacy.

When asked if she called the city to come pick it up, Lacy told Oberg, "We have called and called again."

The city kept telling her they knew about it, but knowing about it isn't enough.

Her daughter emailed Turn to Ted.

"(We called) so we could get something done, because they weren't doing anything," she said.

Lacy is a well-studied Houstonian.

She knew to call 311 and had called both the mayor and her council member too.

She also knew it's an election year and reminded politicians, "If they want my vote, they would have to, you know, do better than what they are doing about this trash situation."

ABC13 Eyewitness News called the city at 1:30 that afternoon. By sundown, a massive city solid waste truck was clawing the pile into a dumpster to be hauled to the landfill.

A second dumpster waited on standby in case it was needed too.

After waiting for four months, it took the city 45 minutes to get rid of it.

"I wasn't expecting it to happen this quick," Lacy said. "But I'm sure glad it did."

When ABC13 Eyewitness News reviewed the 311 records, one report from Lacy was closed with the pile still in front of her home.

Houston's Solid Waste Department looked at the 311 calls too, and sent us the following statement, including the detail that the pile was examined, but not picked up due to its size:

"The Solid Waste Department reviewed the address and received two service requests. Request 3489542 was received on May 14, 2019 the pile was not collected due to violation of ordinance. Service request 3506542 was received Tuesday, May 28, 2019 and serviced Friday, May 31, 2019. The pile is over the 8 cubic yards limit and blocked by an obstacle (mailbox). We collected the pile as a courtesy and want to avoid health issues to the community."

It also provided helpful tips and web links for homeowners.

"Tree Waste" is defined as "clean" wood waste such as tree limbs, branches, and stumps. Lumber, furniture, and treated wood will not be accepted. Junk Waste may not be placed for collection during a Tree Waste month.

"Junk Waste" is defined as items such as furniture, appliances, and other bulky material.

Tree Waste is accepted during Junk Waste Months; however, to ensure your Tree Waste is recycled, you may hold your tree waste materials until the next Tree Waste designated month or take it to a Neighborhood Depository or Recycling Center.

For more information, you can visit the Solid Waste Management Department's website or call 311.

Have a tip for Ted Oberg? A problem to solve? Get in touch with us on our tip page, or send a tip below. (On mobile? You can open our form by tapping here.)
Report a correction or typo
Related topics:
home & gardenhoustontrashneighborturn to tedneighborhoodwaste managementhouston city councilhouston politics
Copyright © 2021 KTRK-TV. All Rights Reserved.
TURN TO TED
Daughter Turns to Ted after mom's washer repairs stalled for months
Woman Turns to Ted for refund help after winter storm canceled trip
Mail service restored after 5 months when couple Turns to Ted
Couple Turns to Ted after hotel cancels trip over pet policy
TOP STORIES
'What happened was evil': Harris Co. deputy constable shot to death
Houston ICU nurse uses Astros to power through COVID pandemic
Enjoy the beautiful, breezy day
Astros look to extend series lead over Boston in Game 2
Miracle boy's mother marries 6 days after happy reunion
NASA's asteroid hunter Lucy soars into sky with diamonds
5th sailor charged in Houston Navy corpsman's death
Show More
Crews use new technology to search for missing TXST student
1 dead in apparent road rage incident in Mission Bend
Bill restricting transgender student athletes' heads back to House
Are the Astros a dynasty after 5 straight ALCS trips?
How you can enjoy Boston food in Houston without heading to the ALCS
More TOP STORIES News