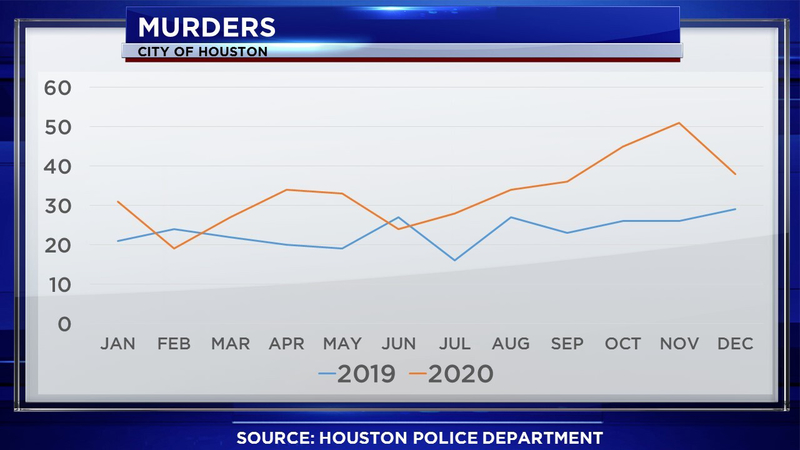 HOUSTON, Texas (KTRK) -- It's a milestone no one will celebrate.

2020 can’t end fast enough. Our city, state, & nation have suffered much from the impact of COVID; illness, death, economic malaise, and an increase in violence.

Sadly, as of today, 400 Houstonians have been victims of murder. Together we must and will stem the tide in 2021.

Violence across the city is up, with aggravated assaults seeing similar upward trends in a year that has been merciless.

Houston's murder rate has increased over the past 10 years, but some dips in the past few years gave officials hope that the city had turned the corner.

Mayor Turner joined community and faith leaders at a "Stop the Violence H-Town" rally as Houston sees a streak of violent crime.

2020's massive increase dashes those hopes amid a pandemic that is keeping suspected criminals from court dates and trials.

Without the court system being able to operate, courts are backlogged at least 18 months, according to Harris County Sheriff Ed Gonzalez, who commented on previous 13 Investigates reporting of the huge slowdown in the court system.

Houston Police Chief Art Acevedo told ABC13's Ted Oberg that officers are laughed at by suspects, who say they'll be free in no time and back on the street.

Historic crime reductions & the renaissance of our urban communities are being thrown away. For what? pic.twitter.com/Nf9fhBL2Sl

Murders have happened across the city, according to an ABC13 analysis that shows no area is immune from crime.

Mayor Sylvester Turner has pledged millions of dollars to help get more officers on the street, but has little progress to show for it so far, according to previous reporting by the 13 Investigates team.