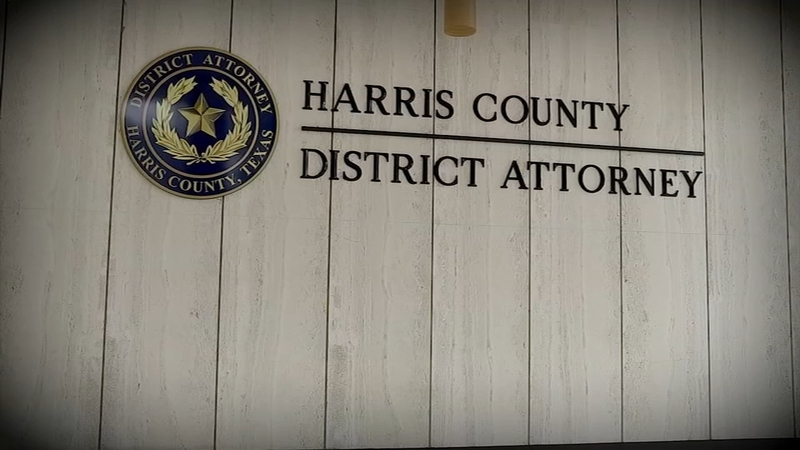 HARRIS COUNTY, Texas (KTRK) -- The Harris County District Attorney's Office responded Monday to an attack last week by Harris County Judge Lina Hidalgo, who characterized an indictment against three of her staffers as weaponizing the system with a "flimsy" case.

A grand jury last week indicted two current and one former Hidalgo staffers, whom investigators say steered a nearly $11 million COVID-19 vaccine outreach contract to a small Houston-based firm and shared proposal documents with the company before they were made public.

"At best, this is going forward with a fundamental misunderstanding of the facts and, at worst, it is the weaponization of the criminal justice system for political purposes so I'm not going to play into that," Hidalgo told ABC13's Steve Campion last Wednesday in her first on-camera interview since the indictments. "My staffers are hardworking people."

Following Hidalgo's comments, the Harris County DA's office is now defending the grand jury, which is made up of 12 community residents.

"Grand jurors give up countless hours of personal and professional time to serve and their service should never be disparaged or dismissed," Dane Schiller, a spokesperson for the Harris County DA's Office, said in a statement. "We want to thank the grand jurors in these public corruption cases for their hard work over a five-month period in which they reviewed voluminous documents and heard from numerous witnesses. Our work continues."

Hidalgo's campaign spokesperson, Toni Harrison responded Monday afternoon, saying, "No one is disparaging the grand jury - that's a red herring to deflect attention from recent media reports raising important questions about this investigation. The fact is, we'll never know what the District Attorney's Office presented to the grand jurors because the process is secret. As we've said since the search warrant affidavits were made public, this investigation appears to have proceeded on a fundamental misunderstanding of the facts. We're confident now that the legal process has moved into public view, the truth will come out and the staffers who have been wrongly accused will be cleared."

Alex Triantaphyllis, who is Hidalgo's current chief of staff but was her deputy chief of staff at the time the allegations took place; Aaron Dunn, then a senior advisor for public safety and emergency management at the county; and Wallis Nader, who is Hidalgo's deputy policy director, were indicted last Monday. Each one of them was indicted on one count of misuse of official information and one count of tampering with a government record.

"Prosecutors presented the evidence to a Harris County grand jury, which determined there was sufficient evidence for criminal charges," Schiller said last week.

Search warrants from the investigation include text messages and emails between Triantaphyllis, Dunn and Nader about the contract before it was awarded, but Hidalgo's legal team has said the snippets of messages in the warrants doesn't offer the full picture.

"The facts just don't add up as they're being presented," Hidalgo said. "It's the middle of an election year and I think it's very clear that the motivations around this are just to harm me politically and it's very sad to see the criminal justice system used that way."

According to investigators, Triantaphyllis, Nader and Dunn allegedly communicated with Elevate Strategies' Founder Felicity Pereyra in January 2021 and allowed her to review and revise the project's scope of work nearly a month before a bid for proposals was publicly available to all on Feb. 19, 2021.

Elevate Strategies was awarded the multi-million dollar vaccine outreach contract in June 2021, but amid the controversy, it was canceled three months later.

Dunn, Nader, and Triantaphyllis were on the five-person committee tasked with scoring the proposals before it was awarded.

The three of them appeared in court last Tuesday with their attorneys and received $3,500 bond each.

The judge told all three of them that they can't discuss the case with one another and are also barred from participating in evaluation committees for county contracts.

As they left the courtroom, Triantaphyllis' attorney Marla Poirot said her client would not be answering any questions.

Derek Hollingsworth, an attorney for Dunn, also did not answer questions but offered a statement.

"I'm proud to represent a public servant. After listening to the prosecutor's rendition of probable cause, I'm really curious to see how in the world they're going to prove this case, but I stand by my client. He's innocent and we look forward to having our day in court," Hollingsworth said.

Calls to Nader have not been returned and on Tuesday, her attorney declined to comment.