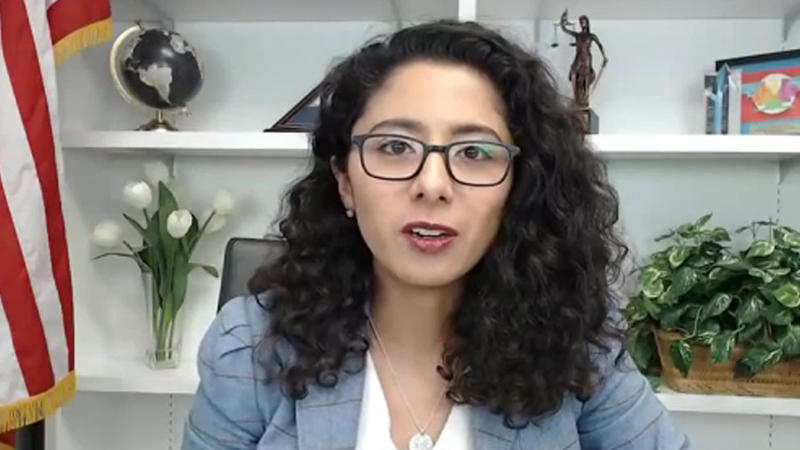 HARRIS COUNTY, Texas (KTRK) -- In her first on-camera comments about the indictment of two current and one former staffer, Harris County Judge Lina Hidalgo attacked county prosecutors for weaponizing the system with a "flimsy" case.

Alex Triantaphyllis, who is Hidalgo's current chief of staff but was her deputy chief of staff at the time the allegations took place; Aaron Dunn, then a senior advisor for public safety and emergency management at the county; and Wallis Nader, who is Hidalgo's deputy policy director, were indicted Monday. Each one of them was indicted on one count of misuse of official information and one count of tampering with a government record.

Investigators allege Triantaphyllis, Dunn and Nader steered a nearly $11 million COVID-19 vaccine outreach contract to a small Houston-based firm and shared proposal documents with the company before they were made public.

Search warrants include text messages and emails between Triantaphyllis, Dunn and Nader about the contract before it was awarded, but Hidalgo's legal team has said the snippets of messages in the warrants doesn't offer the full picture.

"At best, this is going forward with a fundamental misunderstanding of the facts and at worst, it is the weaponization of the criminal justice system for political purposes so I'm not going to play into that," Hidalgo told ABC13 on Wednesday. "My staffers are hardworking people. They work day and night for the people of Harris County and we've got work to do, like this catalytic converter issue or like childhood education, homelessness, huge wins."

Hidalgo's legal team has suggested in off-camera settings that the misunderstanding will be easily explained to a jury, but up until now they have kept her from saying that on camera herself.

During an interview Wednesday morning about catalytic converter thefts, ABC13's Steve Campion asked her about the indictments.

"The facts just don't add up as they're being presented," Hidalgo said. "It's the middle of an election year and I think it's very clear that the motivations around this are just to harm me politically and it's very sad to see the criminal justice system used that way."

When Campion asked Hidalgo, who has not been charged with any crimes, if she's worried about getting indicted, she said "No. I mean, look, I don't know how far this is going to go and it's very easy when you present one-sided facts to the grand jury. Everybody knows a grand jury can indict a ham sandwich if that's all they see."

An indictment is not a finding of guilt, just that a grand jury, comprised of county residents, found there was enough evidence to pursue criminal charges against an individual.

"Since the State of Texas disbanded the Public Integrity Unit, which was housed at Travis County District Attorney's Office, the responsibility for such work has landed exclusively with district attorneys across the state," Dane Schiller, spokesman for the Harris County District Attorney's Office said on Monday. "Prosecutors presented the evidence to a Harris County grand jury, which determined there was sufficient evidence for criminal charges. We will follow the evidence wherever it leads and apply the law equally to all; our work continues."

Triantaphyllis, Nader and Dunn appeared in court Tuesday morning with their attorneys and received $3,500 bond each.

The judge told all three of them that they can't discuss the case with one another and are also barred from participating in evaluation committees for county contracts.

As they left the courtroom, Triantaphyllis' attorney Marla Poirot said her client would not be answering any questions.

Derek Hollingsworth, an attorney for Dunn, also did not answer questions but offered a statement.

"I'm proud to represent a public servant. After listening to the prosecutor's rendition of probable cause, I'm really curious to see how in the world they're going to prove this case, but I stand by my client. He's innocent and we look forward to having our day in court," Hollingsworth said.

Calls to Nader have not been returned and on Tuesday, her attorney declined to comment.

Conversely, county law enforcement are routinely put on leave even before charges are brought.

Search warrants made public last month indicate the Harris County District Attorney's Office and Texas Rangers were investigating whether Triantaphyllis, Dunn and Nader communicated with Elevate Strategies' founder Felicity Pereyra about possible work for the county before a bid for the vaccine outreach work was made public to other potential vendors.

An additional warrant made public last week sought to search and seize documents from the Google customer accounts for Triantaphyllis, Dunn and Nader, as well as Hidalgo, her communications director Rafael Lemaitre and Kathryn Kase, who serves as counsel for the county judge's office.

Investigators have not alleged or accused Hidalgo, Lemaitre, or Kase of misuse of official information.

"This warrant was sought at the same time as the others and simply copies and pastes the same misleading allegations, based on the same cherry-picked excerpts of the same documents," Hidalgo's attorney, Eric Gerard, said in a statement to 13 Investigates last Thursday. "We reiterate our concern that this investigation appears to be rushing forward despite a fundamental misunderstanding of the facts."

In a statement to 13 Investigates on Thursday, Lemaitre's attorney, Murray Newman, with Newman & Chappell Law Firm, said, "Since the inception of this investigation, Mr. Lemaitre has been fully cooperative with investigators and is merely referenced as a witness in the latest documents released by the District Attorney's Office."

Kase's attorney, Nick Dickerson, said last week that Kase is not a target of the investigation, just a witness.

"As a member of the judge's staff and custodian of the records, Ms. Kase certainly would've been involved from time to time in drafting and editing documents available in Google Docs," Dickerson said. "We have nothing to hide. We've collected more than two and a half terabytes of data and turned over thousands and thousands of pages of documents. These (four) search warrants themselves are a little odd. It seems they may be used as an end-around of the attorney-client privilege."

Hidalgo's campaign spokesperson, Toni Harrison told 13 Investigates' Ted Oberg last week that Pereyra was never supposed to receive the scope of work for the vaccine outreach contract before it was publicly released for vendors to bid on.

When Oberg asked why she received the scope of work for the contract, Harrison said, "as wild as this may sound, human error."

"She was sent a scope of work. That was the incorrect document. It was simply human error," Harrison said. "I (sometimes send) the wrong attachment (to people). I probably do that once a day. (In this case), you'll see a trail where that is corrected and another message is sent to (Pereyra) and it says, this is actually the correct scope of work approved by the judge."

The affidavits do not include any messages to Pereyra indicating she was sent the scope of work - that Texas Rangers say is similar to the one for the RFP - by accident.

When asked about it, Harrison said, "that will come out."

The search warrant made public last week called on Google to turn over all versions of three Google Docs links which they believe are related to the project as well as the email addresses for the individuals who the Google Docs were shared with. Different versions of the same document could give investigators a sense of how the project and its scope evolved as Hidalgo's senior staffers and an eventual vendor pored over it.

According to investigators, Triantaphyllis, Nader and Dunn allegedly communicated with Pereyra in January 2021 and allowed her to review and revise the project's scope of work nearly a month before a bid for proposals was publicly available to all on Feb. 19, 2021.

Harrison said Pereyra was being considered for a data analyst position - not the vaccine outreach contract.

"Many of those text messages you see in the affidavit were not with any regard to the RFP. In fact, the RFP wasn't a consideration at the time. They were discussing a data analytics position," Harrison said. "At the time it was, we need someone who can understand data and crunch this data and help us decipher through it. Miss Pereyra had done a wonderful job on the Census outreach in Harris County and Fort Bend, so she was considered, and that's what the outreach was for."

Elevate Strategies was awarded the multi-million dollar vaccine outreach contract in June 2021, but amid the controversy, it was canceled three months later.

Even though the contract was canceled in September 2021, Elevate was still paid $1.4 million. The county has said Elevate is cooperating in paying back $1.2 million of the funds it received.

As part of the investigation, officials seized phones, laptops, and desktops for Dunn, Nader and Triantaphyllis.

Last month, Hidalgo said irrespective of the investigation, as part of a recent review of the county's purchasing procedures, "No office will have staff members on selection committees going forward."

Harrison said although the affidavits indicate UT scored better than Elevate Strategies, that was actually just the score for the initial round.

"In any competitive bid process, there are multiple rounds. First-round is usually a written proposal. The best of those bids comes in for a formal presentation. It was at that point we start to see the difference between Elevate and UT from maybe an accountability standpoint in that UT did not show up for their first presentation round," Harrison said. "Here you have a vendor who hasn't shown up for the next round, who's also managing another project within the county. It's not going very well. There are some rumblings that maybe we need to make a change on that account. It's almost like a reference check if you will, at that point and as you're evaluating, we're talking about an outreach campaign door knocking, going into underserved communities, Elevate came out ahead.

Moving forward, Harrison said the county is implementing changes to how documents are named to ensure potential vendors for county contracts aren't sent RFPs before they're public, especially by mistake.

"(This case) was human error, the wrong document was sent. Now we have a practice. There's a practice on how we do that to ensure we're sending the right document. Look at the document name, things like that can make a huge difference in these types of situations," she said.

Harrison said there have been no staffing changes as a result of the search warrants.