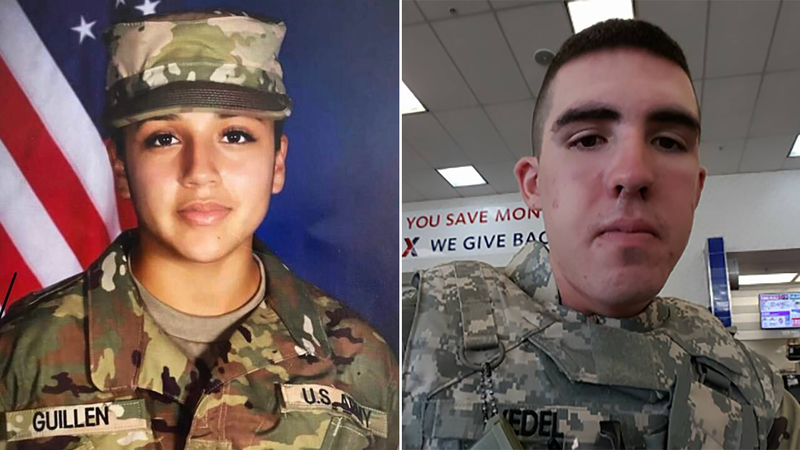 According to military officials, Pvt. Gregory Morales was last seen driving his 2018 black KIA Rio outside of the army base on Aug. 19, 2019. His last known contact was the following day.

Morales, who may be using the last name of Wedel, which was used prior to marriage, was in the midst of discharge, which was due to finalize within a couple of days after his disappearance.

While Morales' disappearance has raised suspicion in the midst of Guillen vanishing, officials want to quash any link between the two cases.

"At this point, investigators have no credible information that this case is in any way connected to the search for Pfc. Vanessa Guillen who went missing from Fort Hood in April. This allegation has been widely circulated via the media and on social media," officials addressed in statement. "Army (Criminal Investigation Command) and Fort Hood continue to seek the public's help in finding PV2 Gregory Morales. According to CID officials, they are convinced someone knows the whereabouts of Morales and are encouraging people to come forward for the sake of Morales' wife, step children, mother and fellow Soldiers."

Morales is an Oklahoma native. Fort Hood was his first duty station while serving in the Army. Authorities said he is known to associate with numerous civilians in and around Central Texas.

A $25,000 reward has been offered for information on Morales' whereabouts.

A separate reward of more than $50,000 has been offered for Guillen, who has been missing since April 22.

Persons with information can contact Army CID Special Agents at 254-287-2722 or the Military Police Desk at 254-288-1170. They can also anonymously submit information at https://t.co/9s3SrHcNdo#FindGregoryMorales #USArmy pic.twitter.com/GyQ33wojT9

The 20-year-old from Houston has been missing for more than 50 days, and now, her case is being exposed to millions on social media.

"She was a very responsible person. I know she just wouldn't leave her stuff there," Vanessa's sist said.