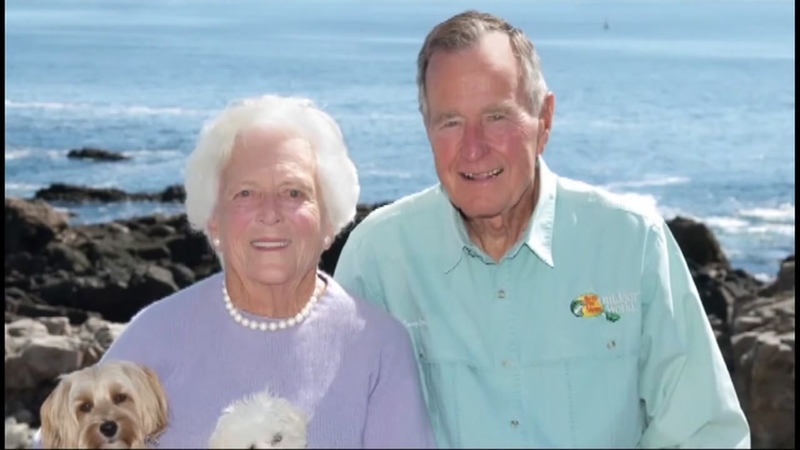 HOUSTON (KTRK) -- George H.W. Bush has been hospitalized at the Texas Medical Center for pneumonia. A spokesperson tells Eyewitness News he was admitted to the ICU at Houston Methodist Hospital to address an acute respiratory problem stemming from pneumonia.

Doctors performed a procedure to protect and clear his airway that required sedation. President Bush is stable and resting comfortably in the ICU, where he will remain for observation.

Additionally, Mrs. Bush was admitted to the Houston Methodist Hospital this morning as a precaution after experiencing fatigue and coughing.

The nation's 41st president was taken to Houston Methodist Hospital on Saturday. While in the hospital, President Bush visited with Cernan family, and was able to say goodbye to former NASA astronaut Gene Cernan, who died on Monday.

George H.W. Bush was admitted into a Maine hospital out of an abundance of caution, according to his spokesperson. He's expected to be OK

Last week, President George H.W. Bush sent a letter to President-elect Donald Trump about missing his inauguration. In that letter, Bush wrote: "My doctor says if I sit outside in January, it likely will put me six feet under. Same for Barbara. So I guess we're stuck in Texas."

"He sent the letter because he wanted the incoming president and his team and the country to know he's rooting for his success because the president's success, regardless of party, is the country's success," said Bush spokesperson Jim McGrath.

The nation is watching their condition with well-wishes pouring in from all over, including the President-elect on Twitter.

"There's not a lot of money to be made betting against George and Barbara Bush," McGrath said. "Right now they're dealing with some not insignificant health challenges. But they have the best doctors and nurses in the world helping them."

McGrath said President Bush was admitted Saturday with shortness of breath related to pneumonia. They expected him out later this week, but that changed Wednesday morning.

"He took a turn, developed some blockages in his lungs and his airways. So they had to do a procedure to remove those blockages," McGrath said.

The procedure was successful and President Bush is in ICU resting comfortably, McGrath said. He added that First Lady Barbara Bush hadn't been feeling well for the last week or so.

"This morning she woke up feeling some fatigue and certainly some persistent coughing, and it got to the point where she didn't feel she wanted to continue treating it at home, so she wanted to go to Methodist. So she's there as a precautionary measure resting comfortably," McGrath added.

There's no timeline on when either Bush will be released.

"They've got such a self-resilience, a determination, a love of life and I know they both have stuff they want to do. And I think that drive is going to see them through," McGrath said. "Obviously that's our hope and our prayer."

Their son, Neil Bush, has been with his parents. At this point there are no plans for any of the other Bush children to come in town.

The 92-year-old Bush has been hospitalized several times over the last few years, including a stay at a Portland, Maine medical center in July 2015, when the former president broke a vertebrae in his neck while at his summer home in Kennebunkport.

Bush was also hospitalized at Houston Methodist Hospital in December 2014 after experiencing shortness of breath, his spokesman said.

In spite of these treatments, Bush is often lauded for staying busy well after his presidency.

From making appearances at Houston Astros games to working on charity initiatives alongside former 1992 rival, President Bill Clinton, Bush continues serving the public good in his capacity as former president.

Back in 2014, Bush surprised many by performing a parachute jump for his 90th birthday.

Before serving as president, Bush was a former U.S. Navy pilot and lieutenant during World War II.

During a bombing raid against the Japanese on Chichijima, Bush's Grumman TBM Avenger aircraft took a fiery hit. With his engine ablaze, Bush bailed out of the aircraft and was left floating on the water for several hours until he could be rescued.

After graduating from Yale, Bush moved his wife Barbara and children to west Texas, where the family ventured into the oil business.

In 1959, the Bush family moved along with Zapata Offshore Company to Houston, where he continued to serve as president.

Bush, who served as chairman of the Harris County Republican Party, was sworn into the U.S. Congress in 1967, and after two terms, was named U.S. Ambassador to the United Nations under President Richard Nixon.

He also served as chairman of the Republican National Committee, chief of the U.S. Liaison Office to China under President Gerald R. Ford, and then director of the CIA.

Bush was elected president in his own right in 1988, defeating former Massachusetts Gov. Michael Dukakis.

He only served a single term as president.