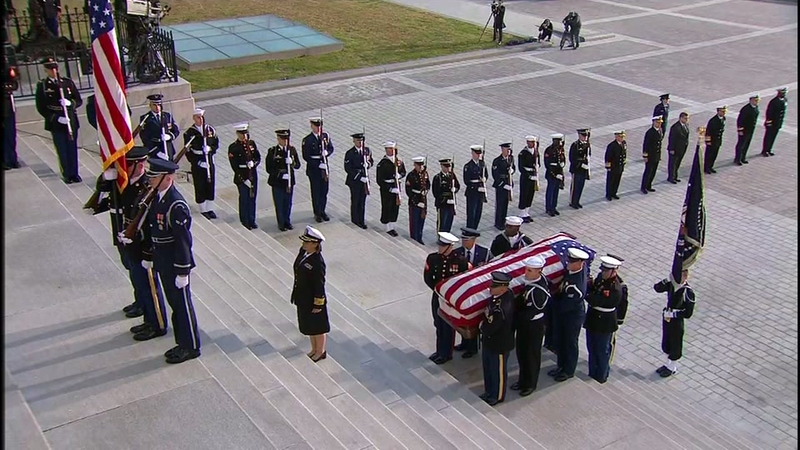 The nation's capital embraced George H.W. Bush in death with solemn ceremony and high tributes to his service and decency, as the remains of the 41st president took their place in the Capitol rotunda for three days of mourning.

With Bush's casket atop the Lincoln Catafalque, first used for Abraham Lincoln's 1865 funeral, dignitaries came forward Monday to honor the Texan whose efforts for his country extended three quarters of a century from World War II through his final years as an advocate for volunteerism and relief for people displaced by natural disaster.

In an invocation opening Monday evening's ceremony, the U.S. House chaplain, the Rev. Patrick J Conroy, praised Bush's commitment to public service, from Navy pilot to congressman, U.N. ambassador, envoy to China and then CIA director before being elected vice president and then president.

Vice President Mike Pence and Republican Senate leader Mitch McConnell also spoke. President Donald Trump did not attend, but he and first lady Melania Trump came to the Capitol later Monday to pay tribute. They stood in front of the casket with their eyes closed for a few moments, before Trump saluted the casket.

Tom Abrahams in Washington at Capitol

Bush's remains arrived Monday afternoon at Joint Base Andrews outside Washington aboard an aircraft that often serves as Air Force One. Former President George W. Bush, the eldest of the four Bush sons, and his wife, Laura, along with brother Neil Bush and his family, were aboard the plane for the trip from Houston.

Pres. Donald Trump and first lady Melania Trump were among thousands who arrived at the U.S. Capitol Monday night to pay their respects.

Family members met at George H. Lewis and Sons funeral home to travel with the motorcade to Ellington Airport for the departure ceremony. Bush's faithful service dog Sully was present at the funeral home with the family.

The flight was sent off with military honors, including a 21-gun salute.

Members of President Bush's Secret Service detail served as honorary pallbearers for the first leg of the farewell ceremony.


President Trump sent Air Force One to carry Bush's body to Washington D.C. Bush's body was transported to the U.S. Capitol Rotunda at 4 p.m. CST. The public was allowed to start paying respects at 6:30 p.m. Monday and will be able to do so through Wednesday at 7 a.m.

National Day of Mourning
The formal service will be held at the Washington National Cathedral at 11 a.m. EST on Dec. 5. President Donald Trump and First Lady Melania Trump will attend the funeral at the cathedral.

Bush will depart Joint Base Andrews after the service at 1:15 p.m. EST Wednesday and will be flown to Ellington.

Final Farewell
The former president's funeral will be held the morning of Dec. 6 at St. Martin's Episcopal Church and be laid to rest in College Station later that afternoon. A custom train will carry Bush from Spring to Kyle Field.
HOW TO WATCH: Where to watch Pres. George H.W. Bush's procession

Bush will be laid to rest at the George H.W. Bush Presidential Library at Texas A&M University. Bush will be buried in his family plot alongside Barbara and their daughter Robin.