2 deputies possibly exposed to Fentanyl while cleaning up drugs at hotel in N. Harris Co. 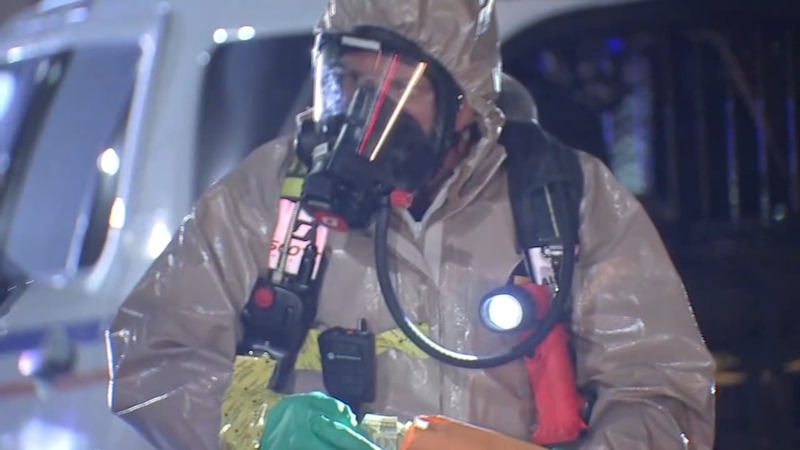 Two female deputies are out of the hospital after investigators initially reported they were exposed to Fentanyl while cleaning up drugs in a hotel room in north Harris County.

Later, at a press conference, Sheriff Ed Gonzalez said investigators aren't sure what the deputies inhaled.

"I just want to throw a little caution in the air because my personal experience in this has been sometimes what could be possibly field-tested as fentanyl may not be confirmed as fentanyl once it goes to the lab," Gonzalez said. "It just happened last night. We'll have to see what was collected out there. Testing could take up to a couple days."

Gonzalez went on to say it could have been something else in the air.

Hazmat teams were seen in full rubber suits, wearing masks, walking into the Extended Stay America. The cleanup at the hotel along the 1500 block of Sam Houston Parkway lasted more than five hours.

Around 9:15 p.m. Wednesday, a member of the cleaning staff went up to a room on the third floor, where deputies say she found illegal drugs, counterfeit cash and printers used to make that money. The hotel manager called 911.

When the deputies went into the room, Gonzalez says it was hot and they inhaled "something possibly in the air." That's when the women reported they began to feel nauseous and dizzy.

The antidote Narcan could help someone with an opioid overdose.

No guests were evacuated, but a nurse staying in a room on the first floor of the hotel said the incident made her nervous.

"We watch the news every morning. I told my husband, 'That's here, that's here.' You could see my car in the shot. I'm freaked out," said Ella Kilchrist.

"They were definitely exposed to fentanyl," Ecke told our crew when ABC 13 first arrived on scene.

The drug was intended as a pain medication, and it's 100 times more potent than morphine.

Three people were arrested in another hotel room. One of them, a felon, was charged with possession of a handgun.

This is not the first time HCSO has believed deputies came into contact with fentanyl only to discover tests showed no sign of the drug.

In June 2019, a sergeant reported feeling ill after she picked up a flyer on her patrol vehicle. It was originally believed the flyer was laced with fentanyl. Tests confirmed it was not.

RELATED: What are Fentanyl and carfentanil?
EMBED More News Videos