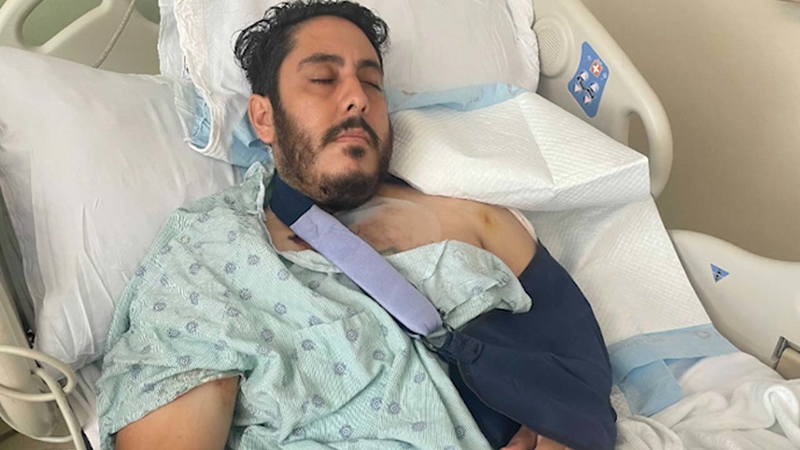 HOUSTON, Texas (KTRK) -- Joel Valdez is lucky to be alive after he was shot six times outside of a Kroger over the weekend in northwest Houston.


"My right forearm, I had one bullet go in and out through there. I was grazed on the chin here, and I had a shot through the neck right here," Valdez said as he pointed to his gunshot wounds from his hospital bed.

Valdez, a new father and business owner, was grocery shopping for his catering business at the store in the 9100 block of West Sam Houston Tollway and West Road.

When Valdez was putting away his shopping cart, he noticed a couple fighting in the parking lot.

"He was shouting, and I didn't realize it was towards me. I thought he was still yelling at her," Valdez said. "I got in my car and I was leaving and he gets in his and pulls up next to me, near the entrance of the store."

Valdez said the man, a complete stranger, said he wasn't happy with the way Valdez was looking at them.

"As soon as I got shot and I was driving away, the only thing I could think of when I saw the blood pouring everywhere was my son and my wife," Valdez said.

Another senseless act of gun violence in the city- I spoke with a man from his hospital bed, after getting shot 6 times. He was leaving Kroger when he witnessed a domestic dispute. He says the suspect wasn't happy that he kept glancing over. His full story on @abc13houston pic.twitter.com/VVJvbYPjBX

On Monday, Harris County officials announced two programs to help reduce gun violence and crime. The first, the Gun Violence Interruption Program, focuses on identifying people at risk of violence, getting to the root causes, and enlisting leaders to help on the neighborhood level. The second program, the Holistic Assistance Response Teams, will be made up of first responders who are trained to specifically deal with non-violent crimes like mental health.

"I can't imagine what would stop this to be honest," Valdez said.

Valdez wants justice and wants to see whoever is responsible be held accountable.

The family asks anyone who would like to make donations to visit this Gofundme page.