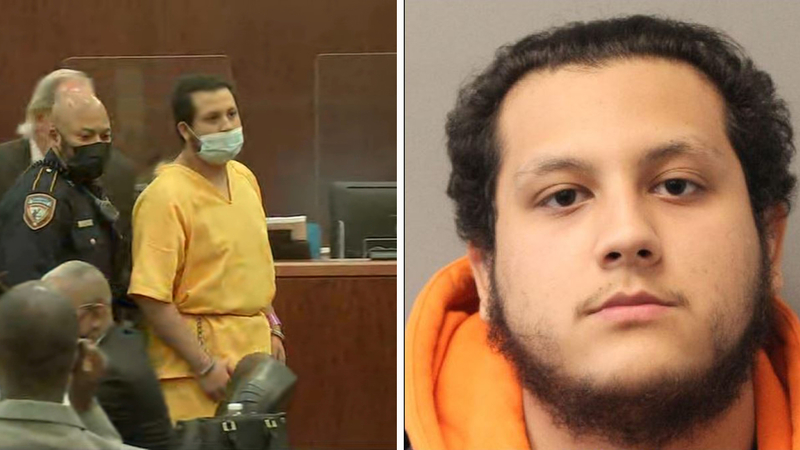 Eddie Miller wore a yellow jumpsuit when he appeared before the judge for his capital murder, aggravated assault with a deadly weapon and attempted capital murder of a peace officer charges.

Miller, who authorities arrested using the fallen deputy's handcuffs, was given no bond for the capital murder charge.

Harris County District Attorney Kim Ogg was in the courtroom Tuesday for the hearing. She applauded the judge's decision for no bond, based on the fact that she says Miller is a danger to the community.

Ogg said in these kinds of cases, the death penalty is on the table, along with life without parole.

"To protect the community and to draw a very clear line in the sand for criminals," Ogg said. "If you kill a cop in this county, you are likely facing the death penalty, or at a minimum, life without parole."

Detectives on the case also spoke in court, saying tips from the community confirmed they were on the right track.

Leaders of multiple Houston-area law enforcement agencies rallied behind the widow of a murdered deputy constable killed in an ambush shooting. A 19-year-old is accused in the killing.

It was security camera footage from the night club, along with the AR-15 recovered from the shooting scene, that they say proved very helpful.

According to a detective in court, Miller was under surveillance Saturday night at a home in Fort Bend County. When he left with his mother, he was pulled over by police, and then surrendered.

As of now, Miller is considered the only suspect in the case, but the investigation is ongoing.

Miller's court-appointed attorneys, who are now sorting through all the facts of the case, spoke to ABC13.

"He has no bond, but we anticipate that we will be requesting a bond," attorney Mario Madrid said. "That will depend on the facts of the case that the state is alleging, his criminal background, if any. My understanding is that he doesn't have any. His ties to the community, possible danger to the community. These are standard questions that a judge is going to look at."

Miller's family was in court Tuesday, but they did not want to speak.

His next hearing is set for sometime in late January.