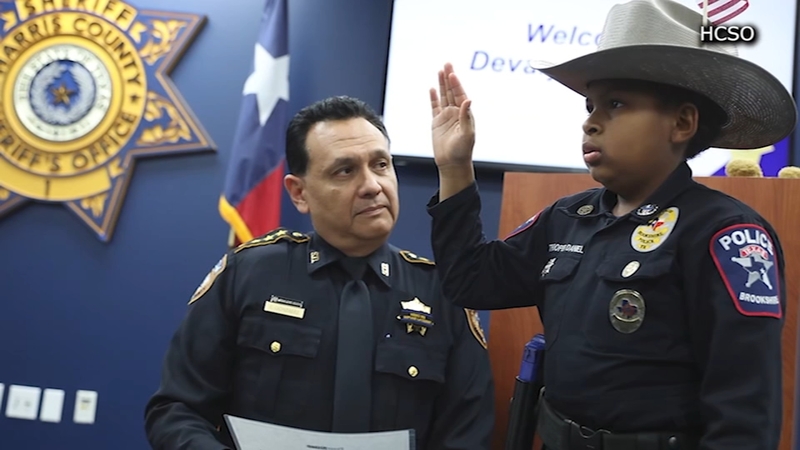 HOUSTON, Texas (KTRK) -- A 10-year-old boy who is battling brain and spine cancer, was sworn-in as an honorary officer with more than 25 law enforcement agencies in Montgomery County.

Devarjaye Daniel (D.J) is not only an ordinary police officer, Houston ISD police took it one step further.

RELATED: 9-year-old Pearland boy battling cancer becomes honorary police officer
No new chief of police would be complete without police patches, pins, and presents. "It's awesome," D.J. said. "From the first one, me and my brothers was overwhelmed."

D.J. started his journey weeks ago, and he successfully reached his goal of joining 100 law enforcement agencies.

This started with a friendship with the Freeport police chief. Freeport police has worked with other kids battling cancer in the past. Since joining Freeport's agency, Daniel hasn't slow down. "Just an amazing story, and we're just proud to be a paragraph in that very long story," Montgomery County Sheriff, Rand Henderson said.

After reaching his goal, Daniel's family knows like his cancer battle, this journey isn't over.

A goal impacting more than the boy battling cancer. "We've had some hard weeks, some hard years in law enforcement, but it's things like this, and events like this and kids like this that keep us coming back for more," Henderson explained.