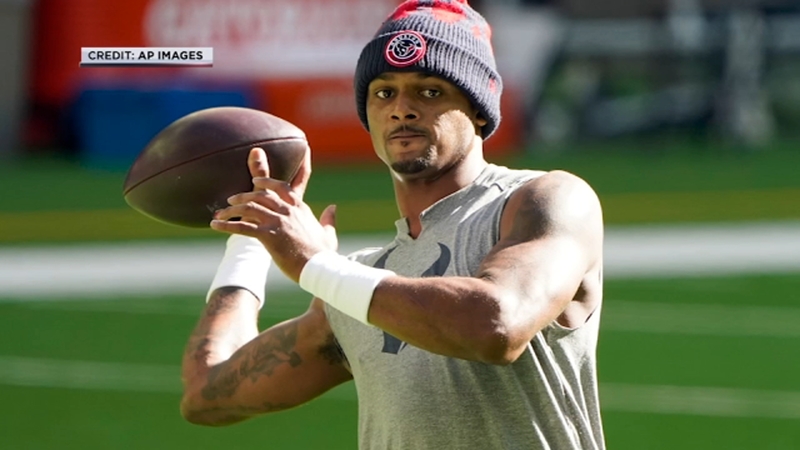 CLEVELAND, Ohio (KTRK) -- Former Texans quarterback Deshaun Watson will be deposed again Friday in Houston in relation to the 22 civil lawsuits he faces from women who have accused him of sexual misconduct and sexual assault.

His attorney Rusty Hardin confirmed that the depositions will take place at his office.


The allegations stem from massages that the quarterback received starting in 2020. The first lawsuit was filed last March. A Houston police investigation began in April 2021 after a criminal complaint was filed.

Watson was traded to the Cleveland Browns in March.

During his introductory press conference in Cleveland, the 26-year-old was asked if he'd go to counseling.

"Like I said before, I never assaulted anyone, never disrespected anyone, I've always been respectful. That's what I've always stood on and that's who I am as a person," he said at the time.
The women have alleged in their lawsuits that Watson exposed himself, touched them with his penis or kissed them against their will during massage appointments. One woman alleged Watson forced her to perform oral sex.

In April, a judge in Texas ruled that Watson must say whether he had sex with 18 massage therapists who supported him last year following criminal complaints and lawsuits from the other women.

USA Today reported at the time that Watson had 30 days to comply. He previously would not address his past with the therapists. Watson also had to provide other information about his massage history since 2019, including any language in his contract with the Texans about massages.

Although Watson has not been charged criminally, the NFL has its own personal conduct policy and could suspend him.

Watson has said that he does not intend to settle the civil suits.

Brazoria County followed suit on a 10th case on Thursday