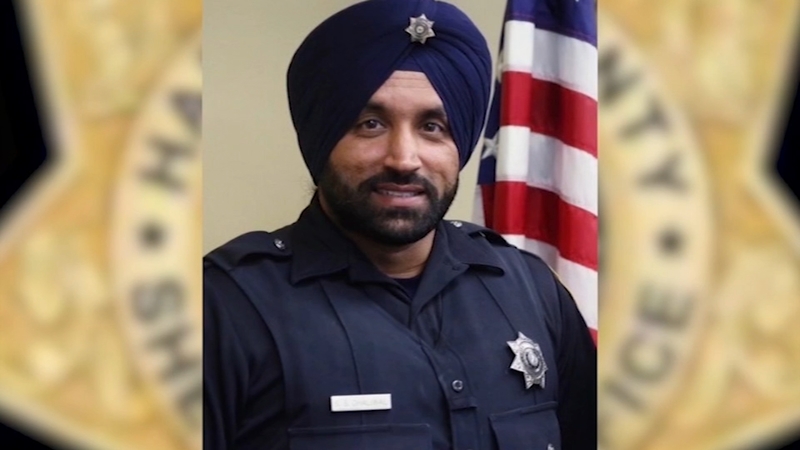 Since his murder, local law enforcement agencies have changed policies to include members of the Sikh faith.

Earlier this month, legislation to name a post office after him passed the U.S. House and is headed to the Senate.

But for Dhaliwal's family, grieving during this pandemic makes the murder feel like it just happened.

"When I close my eyes, he's sitting in front of me. Sometimes I fight with him," said Dhaliwal's older sister Harpreet K. Rai.

"I always put things inside of me, but I don't show," added his younger sister, Ranjeet K. Thandi. "But God knows where I am inside. I never show that I'm sad."

"For me, he's never gone," said his father, Pyara Dhaliwal. "Something I can't show, I can't picture. But I can feel it."

But, for his family, he was Sandeep, the uncle who knew when his nephew needed backup on the dance floor, the father who taught his young son how to wear a turban and the brother who helped his sister buy the SUV she always wanted.

"When we made it to the hospital, it looked like all of police cars from all over Houston was over there," Rai remembered.

A year ago, just after lunchtime, Dhaliwal pulled over a driver for running a stop sign.

As Dhaliwal turned around and walked back to his patrol unit, investigators said Robert Solis got out of his car and shot him several times.

He didn't know that he had just pulled over a fugitive with a lengthy criminal history.

"It obviously changed our world upside down both as an agency and me personally, being that I had a personal relationship with Sandeep and his family," said Harris County Sheriff Ed Gonzalez.

Since the murder, the Houston Police Department and the county's eight constables have changed policies to allow officers on duty to wear turbans and carry religious items.

The sheriff's office now has two Sikh deputies, and in January, Precinct 1 became the first local agency to swear-in a deputy constable who was wearing a turban.

"In this year, which has been filled with turmoil and so much division, it seems at times between community and law enforcement," Gonzalez said, "I think that Sandeep showed us an example of what it could be that everybody could serve, that everybody could connect and embrace the community."

Dhaliwal was scheduled to be promoted to a supervisor role where he would have mentored younger deputies on the type of community policing he was known for.

The dozens of photos and videos that viewers have sent us over the year showed not only a man who loved, but a man who was working for change.

"I didn't know when I looked at him, that he was that person. Only I came to know when he was gone," Pyara Dhaliwal said. "Maybe God is sitting in them, in those needy people. God might be testing you, how you feel it, how you are."

In-person ceremonies recognizing Dhaliwal have been canceled due to the pandemic.

Social distancing means even worship services this year have been virtual.

But even a year after his death, the deputy's legacy is apparent.

"Yes, I miss him," Pyara Dhaliwal explained. "But (on the) other side, he put me so much high in the world that I'm very proud. Very proud."