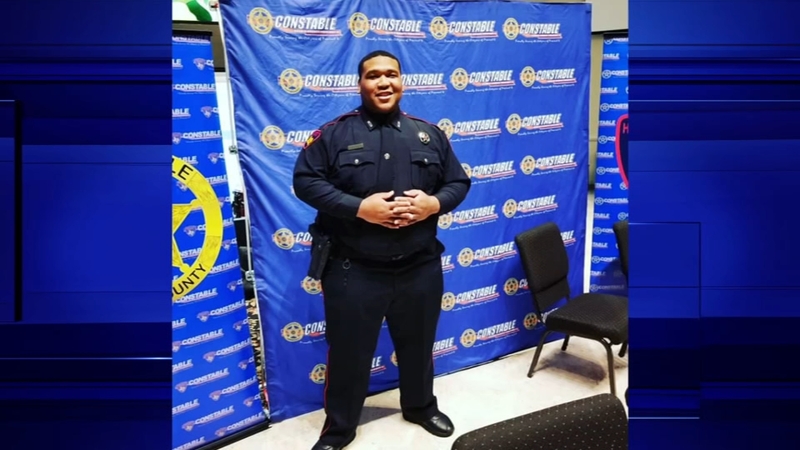 "It takes a strong, selfless man to return to a work after the horrific ambush him and his brothers in blue endured the night of Oct. 16," said Herman.

The incident happened Oct. 16 2021 outside of a north Houston nightclub where Deputy Kareem Atkins was shot to death. Two other deputies, Darryl Garrett and Barthen, were also wounded.

The 100 Club of Houston disclosed donating $20,000 to Atkins' widow and his two small children.

Houston police made the announcement just a couple of hours after Deputy Barthen left the hospital to an emotional tribute by his colleagues.

Barthen, who was wounded in the leg, received an ovation from his co-workers who waited to greet him at Memorial Hermann hospital.

"Today is a good day": Pct. 4 deputy's provide update on deputy Juqaim Barthen's health after he was released from hospital Wednesday morning.

ABC13 COVERAGE IN THE DEPUTIES' AMBUSH

The three constable deputies were ambushed while working extra security jobs at a nightclub. Now a manhunt's underway for the shooter. Here's what we know.

Lajah Richardson still has not told her fiancé, Deputy Darryl Garrett, that his best friend was killed because she fears the news will jeopardize his recovery.

Loved ones on Harris County Pct. 4 deputy killed: 'He truly was, what a father is'
EMBED More News Videos

Deputy Kareem Atkins was shot to death Saturday in what authorities are calling an ambush at a north Houston nightclub.