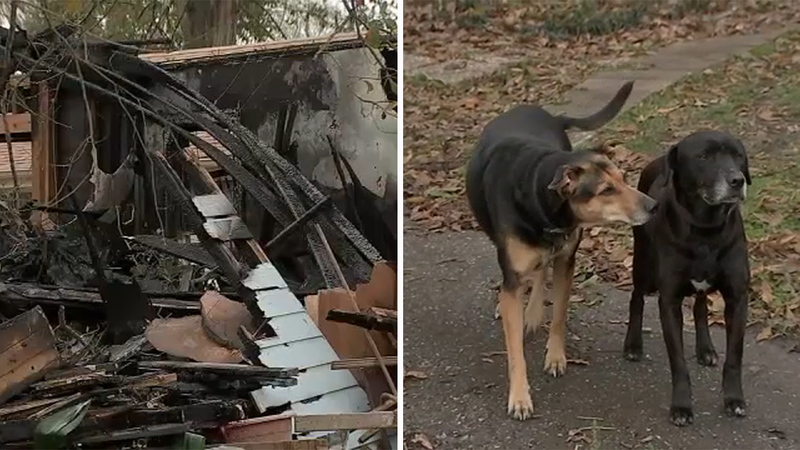 HOUSTON, Texas (KTRK) -- A fire sparked by a space heater overnight ended up costing a veteran his home, and possibly his pets.

Flames were shooting out of a southeast Houston home as firefighters worked to get it under control during freezing temperatures overnight.

The fire was reported on Bonner Street near Radcliffe around 10:45 p.m. Thursday.

ABC13 reporter Courtney Fischer talked to the homeowner, Mike, as he stood in front of what was left of his house. His dog Stella wouldn't leave his side.

His neighbors brought him coffee and a hot breakfast.

Mike, a Vietnam War veteran, had lived at the house since 1984. He said every time there is a cold snap, he sets up space heaters.

He said he set up a space heater in the back bedroom Thursday around 10:30 p.m. He wanted to keep his pets warm.

A METRO bus was brought to the scene to help keep firefighters warm while they battled the flames in freezing temperatures.

He lived at the home alone with eight dogs and four cats.

He woke up to smoke and fire filling his house. A neighbor pounded on his door to alert him to the flames.

He was able to get out safely, but since the fire, he's only been able to find four of his dogs.

"I had smoke detectors but, the one in the kitchen, I don't know if it went off or not," Mike said.

When temperatures dipped into the 20s, Mike only thought about his pets. He said he would do anything to keep them warm.

"I don't want them to be cold now. I don't want to be separated from them, but that's the best thing for them. I need for them to be somewhere safer than this," he said.

Mike is a retired METRO driver. He drove buses for the City of Houston for close to 20 years.

He has a lot of neighbors and friends in the community who are helping him out. The Red Cross will also help him find a place to stay tonight.

Experts say you should take the following precautions when using a space heater: