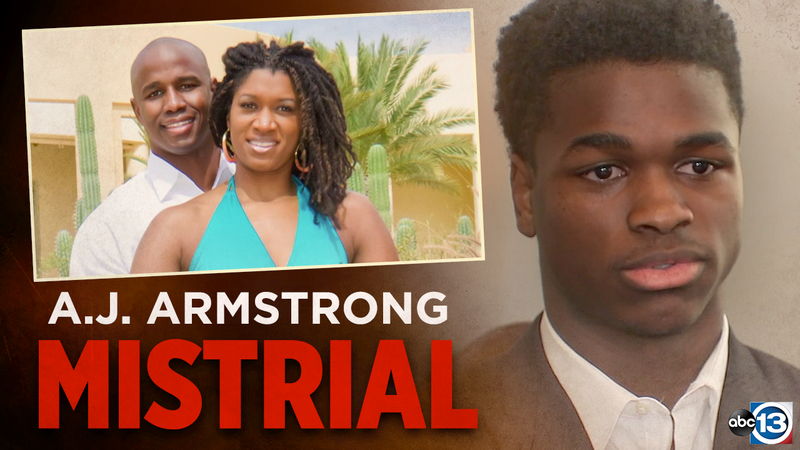 HOUSTON, Texas (KTRK) -- A mistrial has been declared in the A.J. Armstrong double murder trial after the jury could not reach a verdict after three days of deliberations.

Eight jurors believed A.J. was guilty, but four jurors voted not guilty. In this capital murder case, everyone in the jury has to agree, and they just could not do it.

"It is improbable the jury can reach a verdict, and accordingly because of that, the court declares a mistrial," Judge Kelli Johnson announced late Friday evening.

STATEMENT FROM PROSECUTOR WHO TRIED THE AJ ARMSTRONG CASE: “We appreciate the tremendous effort by the jury. Antonio Armstrong Jr. murdered two citizens of our county and we will continue to fight for justice and bring him to trial again,” ADA John Brewer said. #abc13 #breaking

A.J. waited for the jury to leave the room, and then he broke down.

His grandmother, Kay Winston-the mother of Antonio Armstrong, Sr.-was to the left of A.J. She put her arms on her grandson and started praying.

Other family members put their arms on A.J.'s shoulders and on his back. These are the people who have been there from the beginning, supported this young man since he was 16, when Dawn and Antonio, Sr., were murdered.

ABC13 legal analyst Steve Shellist weighs in on what will happen now that a mistrial has been declared in A.J. Armstrong's double murder case.

What a long road it's been. The trial started 24 days ago. The jury heard 38 hours and 13 minutes of evidence. They deliberated for 19 hours and 10 minutes.

The process was exhausting, and in the end, the jury just could not come to an agreement without some of them compromising their morals.

RELATED: What could happen after A.J. Armstrong jury's verdict

"I could not be prouder of a group of people, as far as serving in the criminal justice system," said AJ's attorney, Rick Detoto. "Is this a win? Is it a loss? It is not a win or a loss. We'll keep fighting for this young man as long as we have to, we'll be back in court in a month and we'll continue fighting."

Here's the statement from lead prosecutor, John Brewer:
"We appreciate the tremendous effort by the jury. Antonio Armstrong Jr. murdered two citizens of our county and we will continue to fight for justice and bring him to trial again," ADA John Brewer said.

I asked A.J if he wanted to say anything. He ignored all questions, putting his head down.

Remember, this man is still charged with capital murder, he is out on bond, he is on house arrest. The judge made that clear in court before he left.

A.J. is back in court at the end of May to set a new trial.

JULY 29, 2016 - THE MURDERS
Inside the townhome of Antonio and Dawn Armstrong, the couple, who were owners of a gym in the Bellaire area, were found shot in their bedroom. Both sustained wounds to the head.

Police were informed of the shootings through a phone call to 911 by their 16-year-old son A.J.

Investigators were told by A.J. an intruder pulled the trigger, but they later found nothing out of place inside the home and no signs of a scuffle.

Police also stated A.J.'s sister was at home at the time of the shootings.