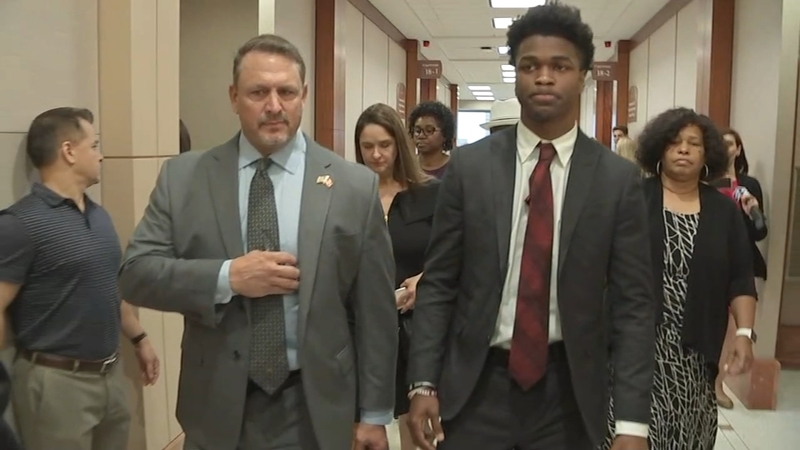 HOUSTON, Texas (KTRK) -- A.J. Armstrong, the 19-year-old accused of killing his parents when he was 16, will go back on trial later this year for the murders of his parents.

His new trial date is set for Oct. 4.

A.J. returned to court Tuesday for the first time since his mistrial.

He was arrested in 2016 after his parents, Antonio and Dawn Armstrong, were found shot to death in their bed.

Nearly a month ago, eight jurors believed A.J. was guilty, but four jurors voted not guilty. As a result, A.J. walked out of court, instead of into a jail cell alone.

The day of the mistrial was an emotional one. A.J. cried in the courtroom as he was surrounded by family, including grandmother Kay Winston, cousins, and friends who held him and prayed over him.

If you’re just catching up on the AJ Armstrong case, judge rules a MISTRIAL. Multiple people with both defense and prosecutors have confirmed the jury split was 8 - GUILTY, 4 - NOT GUILTY. New trial date expected to be set in May. #abc13 https://t.co/rhanOtHJaM

A.J. has since been out on bond. He's wearing an ankle monitor and is allowed to leave the house only for church.


ABC13's Courtney Fischer has spoken to A.J.'s attorneys since the trial ended. The defense says it's gearing up for round two.

When asked if the same witnesses would take the stand, DeToto chose not to divulge those details, either.

In April, some of the most impactful testimony came from A.J.'s younger sister, the only other person in the house the night of the murders.

Prosecutors spent days digging into alarm records, saying the Armstrong security system proved the killer came from inside the house. They showed the jury text messages between A.J. and his parents, painting the picture of a spoiled teen who disappointed his parents.

Perhaps one of the most shocking claims came from the defense, who said A.J.'s older brother, Josh, who had access to the Armstrong home, could have been the killer.

The prosecution team is not changing and at the end of the trial gave ABC13 this statement:

"Antonio Armstrong Junior murdered two citizens of our county, and we will continue to fight for justice and bring him to trial again."

A.J. has always maintained his innocence.