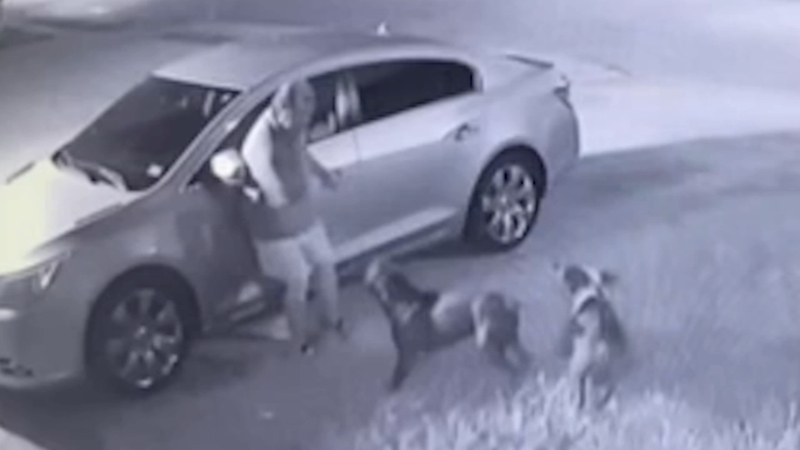 HOUSTON, Texas (KTRK) -- An elderly man out on his morning walk was sent to the hospital by Life Flight on Thursday, the victim of an attack by two dogs that got loose in a northwest Harris County neighborhood.

A home surveillance camera captured the ordeal so brutal that Eyewitness News elected only to show the moments leading up to the attack on Brookhead Trail in the Northcliffe subdivision.

On the video, you see the man backing away as the canines aggressively advance on him. He then backs up against a vehicle as the dogs continue barking.

This is the second dog attack in the Houston-area in one day.

What you won't see is the dogs ultimately getting him on the ground and tearing away at him.

The presentable footage then shows neighbors come out and rush to the man's aid. One person, who later identified himself as Darrell Barryman, comes in with a long stick to scare the animals off.

Elmer Levigne, a former Harris County Sheriff's Office deputy whose camera captured the brutal attack, also stepped in, armed with his own handgun.

Barryman and Levigne both managed to get the dogs off the victim, but the pit bulls started charging at him. That prompted Levigne to shoot one of the canines through the shoulder.

The Harris County Precinct 4 Constable's Office then responded and one of the deputies shot the other dog as they tried to control the situation.

Animal control personnel came in to pick up the animals when one of the workers was also bitten.

The unidentified victim, whose blood still stains the concrete where he was attacked, was flown to the hospital in critical condition.

The dogs are in animal control custody. Authorities say the animals are under a 10-day quarantine, after which deputies or animal control will decide on the dogs' fates.

Meanwhile, the dogs' owner, who did not want to speak on camera, told Eyewitness News that he had the canines behind an enclosure, but insisted a friend may have accidentally left the gate open before the attack.

It's not immediately known if any charges are being filed in the attack.

Later Thursday, the Harris County Sheriff's Office said it sent homicide investigators to the neighborhood to look into the attack.

It's been a month since the 3-year-old was attacked. Since then, the dog was euthanized and the owner is jailed. But the family of the young victim says their daughter is not the same.

An 81-year-old woman from League City recalls her terrifying attack by a loose dog while she was walking her own canine at a park.

She spoke with ABC13 and said she only remembers loud honking from a car as she was being mauled by three pit bulls.