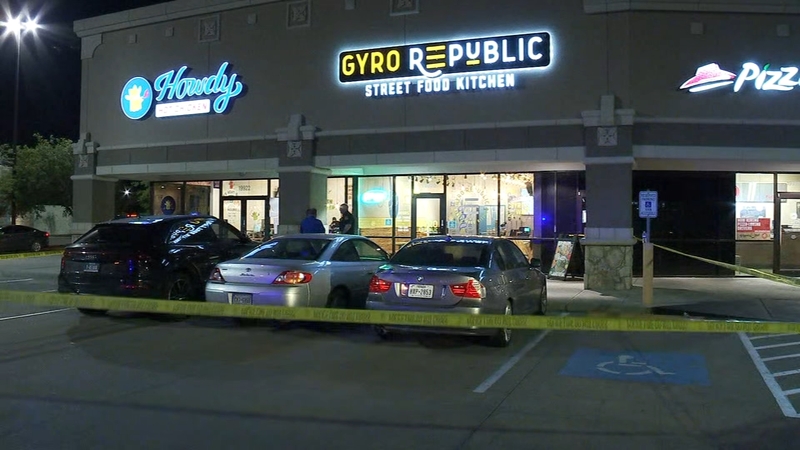 SUGAR LAND, Texas (KTRK) -- An employee was shot while trying to sell a phone outside of a Sugar Land restaurant by a potential buyer, police said.

It happened outside of the Gyro Republic restaurant at the Riverpark shopping center off the Southwest Freeway Tuesday night. According to police, an employee of the restaurant was trying to sell a phone to two potential buyers.

That's when an argument ensued and one of the suspects pulled out a gun and started shooting, police said. The suspect wasn't aiming at anyone, according to police, but the seller ended up getting shot twice.

He was rushed to the hospital and ABC13 is told he's expected to be okay.

Jayden Busch, who was working nearby when it all happened, said he initially thought something had fallen.

"Myself and my boss we come up to this window and we try to look around the corner, just to see what happened or to see if anything fell again, right? Then, another shot, another loud bang," he said.
Busch said he and a co-worker noticed a shell casing hit the ground.

Busch said he saw the seller inside the restaurant getting help.

In the video above, a witness breaks down what he saw when this shooting all unfolded.

"What I saw there was a guy inside, he was on his back, he had some napkins on his back. He got hit by a ricochet. He didn't get hit directly, which is good. I think we're all really lucky that nobody got serious injuries," he said.

The suspects took off, but police said a good Samaritan followed them all the way to Richmond. The good Samaritan called police and officers ended up arresting both suspects.

They're now in custody. Police said charges are currently pending. The incident remains under investigation.