13 Investigates looks at who still needs to vote Election Day 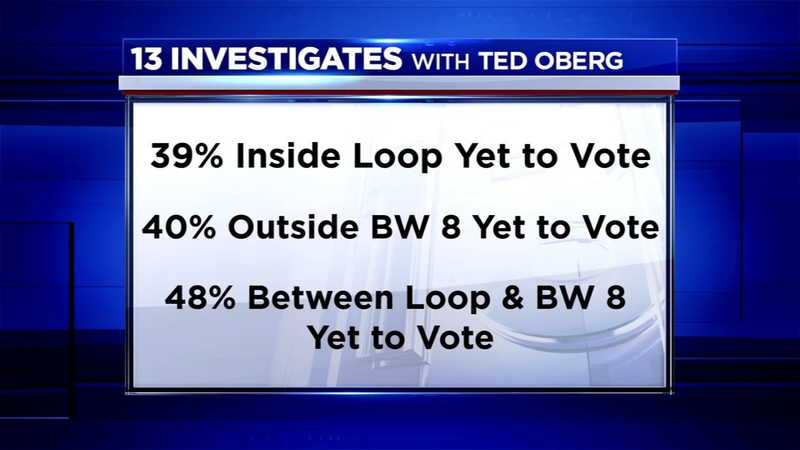 The parts of Harris County with worst early voter turnout

During the 18-day early voting period, 58% of residents voted early.

13 Investigates used individual voter data to analyze which parts of town had the most early voters and who still needs to vote.

Every morning, Harris County releases a list of the names and addresses of everyone who voted early the previous day. The data doesn't provide any information on how they voted, but it does tell us where they live, and combined with demographics with the area, the data gives us a picture of what types of communities are voting.

The map below has information on the total percent of registered voters who still need to cast a ballot. Compare it with how those precincts voted during the 2016 presidential election On mobile device? Click here for a full screen experience.

There are about 1,000 precincts in Harris County. We divided the precincts into three regions, including Houston's inner city inside the Interstate 610 loop, the area between the 610 loop and the Texas 8 Beltway, and everything else outside the beltway but within the county's more suburban areas. If a precinct overlapped I-610 or the beltway, we assigned those votes to the area where more homes appeared to be located.

RELATED: What you need to know before heading to the polls in Texas

INTERACTIVE: The map below has information on the total percent of registered voters who still need to cast a ballot. The colors are divided into three geographic regions.The darker color within each region indicates areas where more registered voters still need to vote. On mobile device? Click here for a full screen experience.

What's the latest on drive-thru voting?

Nearly 127,000 Harris County residents voted at one of 10 drive-thru voting locations during early voting. The majority of those drive-thru ballots were cast by women and the average age of the drive-thru early voter is 44.

"Drive-Thru Voting was created in the wake of the COVID-19 pandemic as a safer, socially-distant alternative to walk-in voting for all voters. Harris County is the first jurisdiction in Texas history to create this new method of voting at scale that allows any registered voter to cast their ballot without leaving the comfort of their vehicle," according to the county clerk's website.

Despite attempts from Republicans to halt drive-thru voting and void the 127,000 residents who cast their ballot at an early voting drive-thru, U.S. District Court Judge Andrew S. Hanen ruled late Monday afternoon the 127,000 drive-thru ballots already cast could not be invalidated.

Jared Woodfill, the attorney representing the group of Republicans, filed an appeal to the U.S. Fifth Circuit Court of Appeals on Monday night, seeking to reinstate the case and close drive-thru voting, however that appeal was denied.

Drive-thru voters should enter the Toyota Tundra Garage at the intersection of Leeland and Crawford Street to access this polling location.

Each polling location and the wait times to vote are available on the county clerk's website.

You can also view a sample ballot for Harris County.

INTERACTIVE: The map below shows the locations where early voters who cast a ballot via drive-thru live. The larger the dot, the more drive-thru voters. Slide to the map on the right to see how those areas with the highest drive-thru voter turnout voted in the 2016 presidential election. On mobile device? Click here for a full screen experience.

What communities turned out more during early voting?

Our analysis found minority communities are not voting early as much as white individuals.

When looking at the race and ethnicity of residents in each precinct, 13 Investigates' analysis of voter data found only 46% of registered voters cast a ballot in communities where more than half the 20-plus population is Hispanic. The Census demographics we analyzed provide population totals by age in five-year increments, which is why we looked at populations 20 years and older versus 18 years and older.

Only 43% of residents in communities where the median household income is less than $64,034 have cast a ballot.

Statewide, 57.17% of Texas' 16.9 million registered voters cast their ballot by mail or in-person during the 18-day early voting period, according to the Texas Secretary of State.