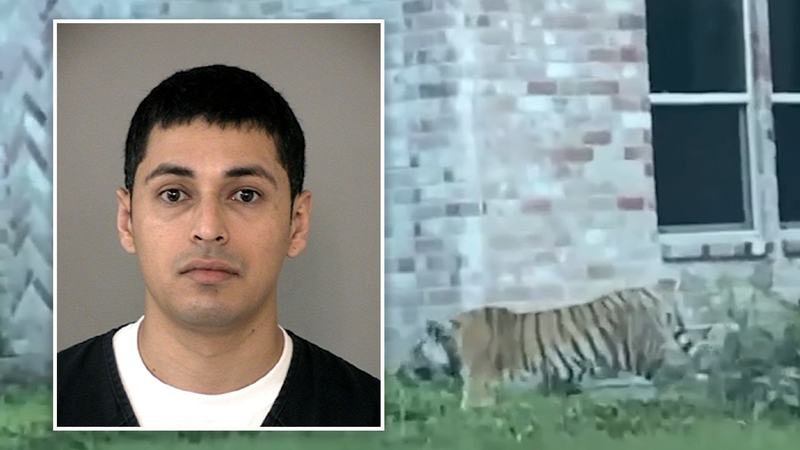 HOUSTON, Texas (KTRK) -- The man at the center of one of the most outlandish but very real wild animal encounters in Houston has been convicted of murder in a separate case from nearly five years ago.

Victor Cuevas has been on trial since April 20 for the July 2017 deadly shooting at a Fort Bend County shopping center. A jury returned a guilty verdict for murder on Tuesday.

The video above is from the original story.

Cuevas was out on a $125,000 bond when a video circulated of him wrangling a tiger in a west Houston neighborhood in May 2021. The sighting drew national attention, partially due in part to the unknown whereabouts of the wild animal after Cuevas took off from the neighborhood.

At one point, a citywide search took place to find the tiger named India.

Cuevas was later apprehended on a felony evading arrest charge, but without the tiger. To this day, the 26-year-old faces no charges for the loose animal. Texas allows exotic animal ownership, but it's prohibited within Houston city limits.

In the weeks following the arrest, Fort Bend County courts revoked his bond, which raised the amount from the original $125,000, but Cuevas was able to afford the increased amounts.

Over that time, Cuevas' attorney had insisted his client doesn't outright own India.