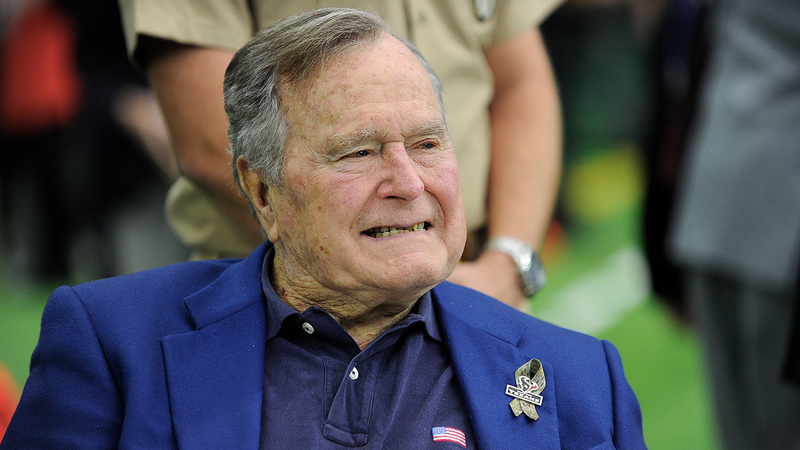 HOUSTON, Texas (KTRK) -- President George H.W. Bush faces his latest medical episode, which was described by his spokesperson as an infection that spread to his blood.

In recent years, the 93-year-old Bush has been in and out of the hospital for various ailments.

Bush was diagnosed with a form of Parkinson's disease that has forced him to use a motorized scooter or a wheelchair for mobility.

Over Christmas in 2012, he was admitted into a Houston intensive care for a bronchitis-related cough and other issues.

For about a week in December 2014, he spent time in the hospital for shortness of breath.

While in Maine in 2015, Bush had to have surgery after breaking a bone in his neck from a fall. A doctor estimated a three-to-four-month recovery time for the injury.

George H.W. Bush was admitted into a Maine hospital out of an abundance of caution, according to his spokesperson. He's expected to be OK

In January 2017, Bush was admitted to the hospital for pneumonia. Over the 16-day stay, the president spent some time in intensive care and had a breathing tube connected to a ventilator inserted into his airway. This time in the hospital was noted for his wife Barbara Bush also being treated for fatigue and a cough.

Take a look back at George HW and Barbara Bush's health history.

Family spokesman Jim McGrath said President Bush will remain at the hospital under observation following a mild case of pneumonia.

A week after arriving in Kennebunkport, Maine, where he spends the summer, the former president was admitted to the hospital.

Spokesperson Jim McGrath said in a statement released on May 27 that Bush was admitted to Southern Maine Health Care after experiencing low blood pressure and fatigue.

He will likely stay there for the next few days. According to the statement, the president was awake, alert and not in any pain.