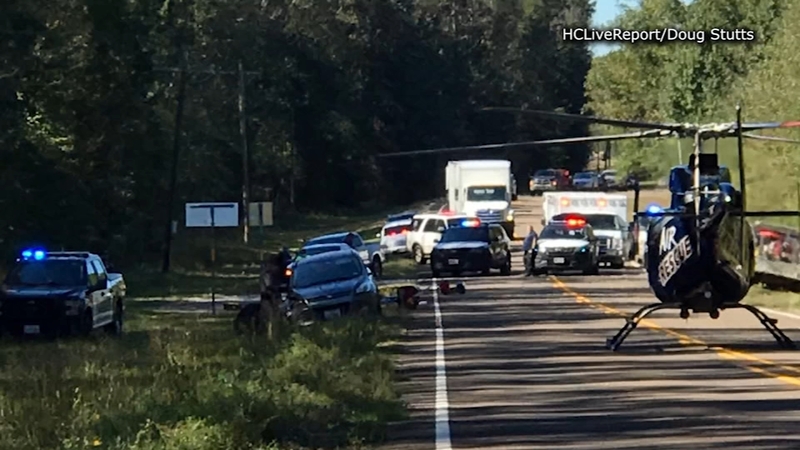 LIBERTY COUNTY, Texas (KTRK) -- A Liberty County man has been charged with the death of a cyclist after crashing into a group of them in Rye, Texas back in October.

Michael Weaver allegedly hit the group with his Ford Escape along FM 787 on Oct. 30

SEE PREVIOUS STORY: 6 cyclists injured after being struck by car in Liberty Co.

Weaver told investigators in the crash report that he is visually impaired in one eye and blind in the other. Troopers claim his failure to control his speed lead him to hit the six cyclists.

The 66-year old man is accused of killing 51-year-old Kent Wosepka, a cycling enthusiast from Massachusetts, who was taken to a Beaumont hospital and died the next day. Two others were also hospitalized in serious conditions including Wosepka's fiancée, Betsy O'Brien.

If convicted, Weaver could face up to two years in jail. It is unknown if he was arrested.

RELATED STORY: Teen intended to 'smoke' cyclists, but plowed into them instead
Report a correction or typo
Related topics:
liberty countycyclingcrimehospitalbicycle crash
Copyright © 2022 KTRK-TV. All Rights Reserved.
BICYCLE CRASH
Bicyclist killed in hit-and-run crash on Mount Houston at I-45
Driver sentenced to 18 years in cyclist death from '18
Cyclist killed while crossing dark area of Hwy 6 in W. Houston
Drivers can now face felony charges for fatal pedestrian crashes
TOP STORIES
Judge: COVID asylum restrictions must continue on US-Mexico border
IRS conducting criminal investigation in Uptown Houston
Woman stabbed to death allegedly by husband was a Katy ISD employee
Woman stopped at US border with condom-wrapped fentanyl
Northbound I-45 blocked before FM-518 in League City
Here's how many inches of rain you could get over the next 7 days
Store clerk triggers panic button causing robber to scramble
Show More
Investigations resume for parents of trans children, lawyers confirm
Celebrate National Streaming Day with Hulu for $1/month for 3 months
From Disney+ to Hulu and ABC13, here's what to binge
Houston gets highlighted as stop in the GMA 'Rise and Shine' tour
Wanted suspect shot and killed by Pasadena police during foot chase
More TOP STORIES News