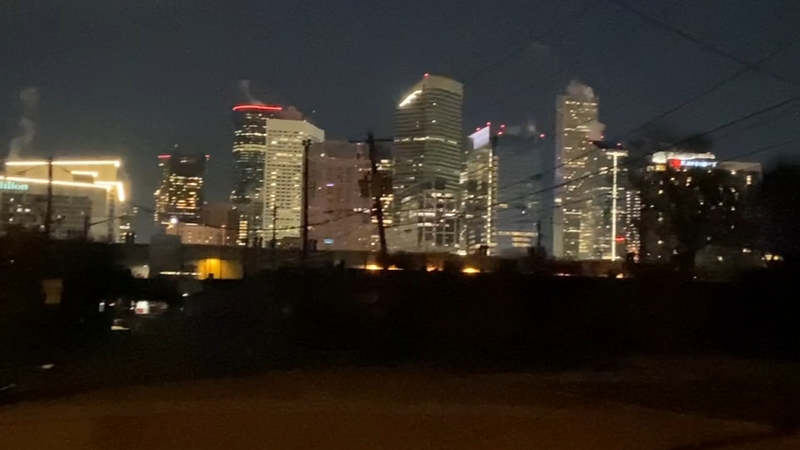 HOUSTON, Texas (KTRK) -- With more than 1.3 million people in the Houston area still without electricity in the bitter cold, many wondered why empty offices in downtown skyscrapers remained brightly lit Monday night.

On Monday at about 8:30 p.m., the Houston skyline was visible, brightly lit up in the night as surrounding homes and businesses were left in the dark.

Here’s a look at the city skyline tonight, with many of the surrounding homes and businesses in the dark. pic.twitter.com/W5N2hfH02v

The visual has since garnered thousands of shares and reactions on social media, many of which include comments full of concern.

As we saw Downtown lit up last night while so much of the county was dark & cold, we made calls about getting it shut down. Many did their part, not all. We worked on them all day and they committed to turning off tonight. History will remember people's actions. Do your part. https://t.co/clcNagSbQ1

Some Houstonians claimed they were also upset because residents of Dallas said city officials urged downtown businesses and buildings to turn off non-essential lights and equipment to conserve energy.

Meanwhile, Houston Mayor Sylvester Turner was critical of the state's power grid when speaking with Eyewitness News on Monday.

He compared the situation to a storm Houstonians can't forget.

Houston Mayor Sylvester Turner was critical of the state's power grid when speaking with Eyewitness News on Monday.

"In 2008, when Hurricane Ike came through this area, there was a lot of conversation at the state level, even in the legislature, about ways to harden the system ... to improve the system," said Turner. "That was in 2008. That should've been a wake-up call. What you cannot have is ... just in the Houston region alone, 1.2 million customers without power for an extended period of time."

We also spoke with Gov. Greg Abbott on Monday and he said the massive outages that left millions in the dark were caused by private power companies that "fell short," calling it the winter version of "Hurricane Harvey."