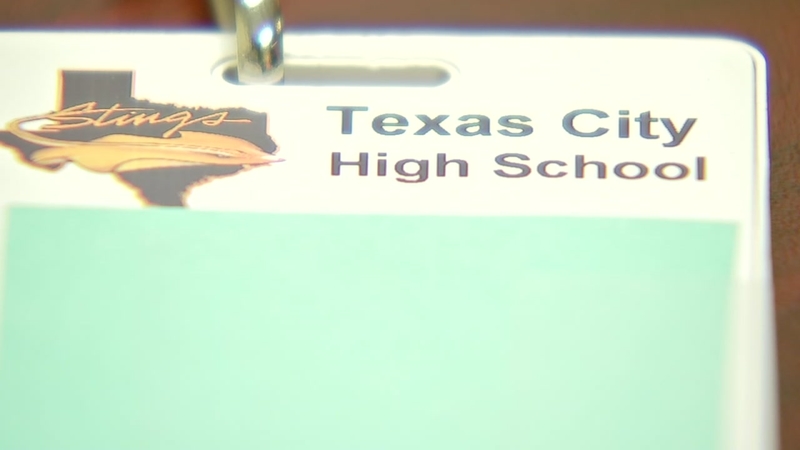 He says the Santa Fe shooting that left 10 students dead made him realize he needed an expert in safety and security on staff.

"I always wanted to come back and give back in some way," said Matranga.

Since his hiring in the summer, Matranga implemented several measures. He added eight deputies on campus, launched an app that gives dispatchers access to school cameras, and instituted ID badges with a built-in chip.

"I want to give the parents peace of mind that in the event of an emergency I can tell them where their child is at immediately," Matranga said.

Beacons installed in the ceiling of school buildings and buses will detect the badges, and administrators will be the only people with access to the location data.

"I know they want to keep us safe and everything but this is kind of not the way to do it," said Texas City High School senior Arick Walker.

He feels the badges are an invasion of privacy.

"The tracking part I don't like it," said Walker.

Matranga told ABC13 the system will not be monitored all day, and it can only detect badges within 150 feet of school property. Once outside that area, it goes dark.

"There's a common misconception that we're tracking kids 24/7. That is not what we're doing," said Matranga. "Being a parent myself - I have two daughters that go here - that is a relief to me knowing that someone will know where my child's at in the event of an emergency."

"Why are we not trying to keep guns out of the schools in the first place?" he asked.

He thinks metal detectors would do more to prevent an active shooter situation like the one in Santa Fe than ID badges.

"They say, 'Well there's too many doors.' You don't have to put them on every door. You restrict access. Then the complaint is, 'Well it takes longer for the kids to get into school,'" said Haynes. "So what?"

Matranga admits the ID badges won't keep a dangerous person from accessing the building but will provide a faster response time if they do.

"People need to have a realistic conversation with themselves. What's going to prevent someone who has decided they're going to commit murder to not commit murder?" said Matranga. "I can shoot you at the doorstep, in the parking lot, and there's nothing you're going to be able to do to stop that other than have an officer with a gun inside that school."

The beacons are already installed in both high schools and both middle schools.

Elementary schoolers will soon be required to wear the badges on their backpacks.