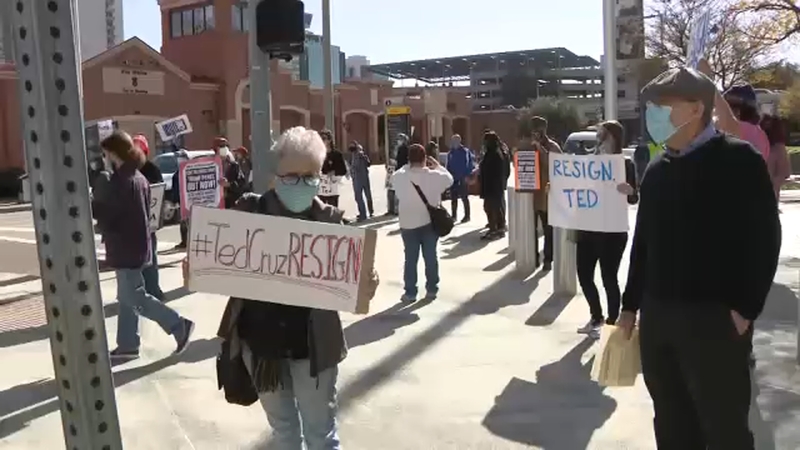 Indivisible Houston, a group that says it advocates political unity and accountability, organized the demonstration in downtown Houston in an effort to raise awareness about the efforts demanding Cruz and other elected officials to step down from office.

Cruz objected to the electoral certification of Joe Biden's 2020 election victory during a joint session of Congress on Jan. 6, asking for a national audit of the 2020 Presidential Election results. Cruz's efforts were the result of unproven claims of widespread voter fraud. During the session, rioters stormed the interior of the U.S. Capitol, causing an evacuation of elected officials. The riot left five people dead, including a U.S. Capitol police officer.

President Donald Trump's claims of winning the election, conspiracy-laden theories and a Jan. 6 speech at the Ellipse are being blamed by some for inciting the deadly ordeal. Since Jan. 6, Cruz has also become a central figure being blamed. Neither Cruz nor others who objected presented any evidence of widespread fraud. The Texas Senator did cite an unnamed opinion poll as reasoning for his audit call.

"Let me be clear: I am not arguing for setting aside the result of this election," he said during a speech on the House floor on Jan. 6.

"Recent polling shows that 39% of Americans believe the election that just occurred, "was rigged." You may not agree with that assessment. But it is nonetheless a reality for nearly half the country," Cruz said. "I would note it is not just Republicans who believe that. Thirty-one percent of independents agree with that statement. Seventeen percent of Democrats believe the election was rigged. Even if you do not share that conviction, it is the responsibility, I believe of this office to acknowledge that as a profound threat to this country and to the legitimacy of any administrations that will come in the future."

Cruz was later evacuated with the other Senators and Representatives as the rioters breached entrances and filled the hallways of the Capitol.

"The Constitution protects peaceful protest, but violence - from the Left or Right - is ALWAYS wrong," Cruz tweeted during the ordeal.

Those storming the Capitol need to stop NOW.

The Constitution protects peaceful protest, but violence—from Left or Right— is ALWAYS wrong.

And those engaged in violence are hurting the cause they say they support.

Cruz has said repeatedly since the incident that he has no intention of stepping down.

"I do think it's really cynical for them to be trying to take advantage of what was a tragic event, Cruz told ABC13's Tom Abrahams on Jan. 7.

The Texas Democratic Party has launched a campaign aimed at the resignation push, setting up a website TraitorTed.org for their efforts.

While many prominent GOP office holders have been silent on Cruz, Texas Lt. Gov. Dan Patrick came out in the Senator's defense in a Jan. 9 letter to supporters on his campaign website titled, "Enough."

"From Democrats demanding Ted Cruz resign for taking the same stand that Democrat California Senator Barbara Boxer took in 2005 (along with 31 other Democrat senators) who wanted the Ohio election overturned," Patrick wrote. "It was their right then, and his right today. Neither Sen. Boxer nor Sen. Cruz incited protesters to strike the Capitol."

Official: No 'direct evidence' of plot to kill at Capitol during siege