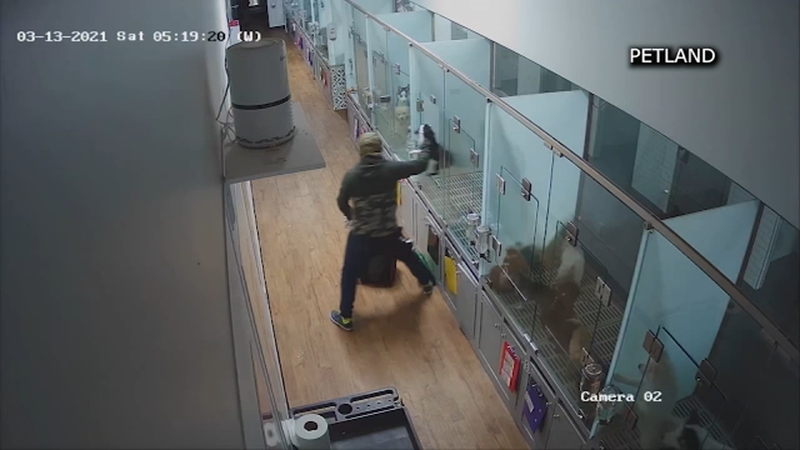 WEBSTER, Texas (KTRK) -- Authorities are trying to solve a crime in which puppies were stolen from a pet store in Webster early Saturday morning.

The dogs were taken from the Petland Webster facility. The thief was caught on surveillance camera running through the store, opening doors and grabbing puppies to stuff them into a duffle bag.

While the suspect was fleeing the pet store, Dulce, the Boston terrier, popped out of the bag and ran back into the store, and was later found hiding in a back room. Milo, the French bulldog, and Rusty, the English bulldog, were stolen.

"I have a personal relationship with all of these dogs," said sales manager Kristen Andrews. "My immediate reaction - they took these puppies, those are my babies. So you're messing with my babies."

The French bulldog is reportedly valued at about $9,400 and the English bulldog is said be worth more than $10,000.

"At Petland Webster, we are truly shocked and saddened by the news today that three of our beloved pups were taken from us," said an official statement from the business. "These three puppies were ready to be taken home by a loving family."

French bulldogs have become commonly targeted by thieves. Perhaps the highest-profile case of French bulldog theft happened when two of Lady Gaga's dogs were stolen after unknown assailants shot her dog walker in the chest.

Store owners and employees are cooperating with the authorites. They're asking the public for any help or information that might help bring the puppies back safely.