George HW Bush's train to be part of his presidential library 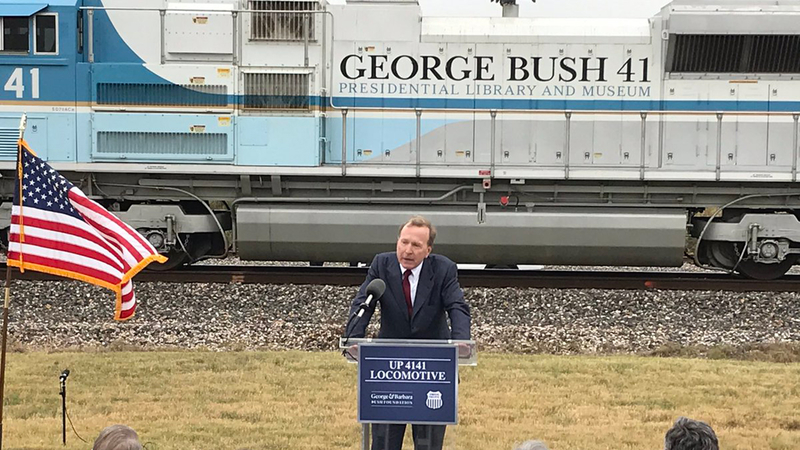 COLLEGE STATION, Texas (KTRK) -- The locomotive named after President George H.W. Bush, and the one used to carry his body, will soon be put on permanent display at his presidential library in College Station.

Union Pacific made the announcement on Friday. Locomotive 4141 was created in 2005.

Bush served as America's 41st president, which is why it's called "4141" and painted to look like Air Force One.

Last December, the locomotive was used to transport the president's body from Houston to College Station. It's a trip it once again made Friday.

"Today is its last day in service," Union Pacific Senior Vice President Scott Moore explained. "We'll take it back to a shop in Little Rock. Get it ready for a permanent display. Ultimately, when the money is raised to finish this out, we'll bring it back, take it off the tracks, and move it over there by the library."

Members of the Bush family were at the announcement. They spoke to ABC13 about placing the train at the presidential library.

"I can't wait to see it," Neil Bush, the president's son, said. "They have a little work to do before they put it into that beautiful rendering, but it's going to be another amazing addition to the Bush complex."

Locomotive 4141 was transported by Union Pacific's "Big Boy" train. It was retired in 1961, but is currently touring Texas.

The 1.2 million-pound train will leave Texas soon, but Union Pacific is working on more plans for it as well.

"The Big Boy will finish off its tour. It's on about a 110-day tour all together this year. It'll finish in Wyoming around Thanksgiving," Moore explained. "Then, next year, we'll take her out for another trip."

No word on when Locomotive 4141 will officially move to College Station. Once it does, Neil Bush said it's a sight his dad would've loved to see.

"He loved trains," Bush recalled. "He was like a little kid at heart. There's something special and nostalgic and patriotic about trains that drew my dad. So, to have this moment now, where the big one is towing the little guy to the final resting place, is very special."