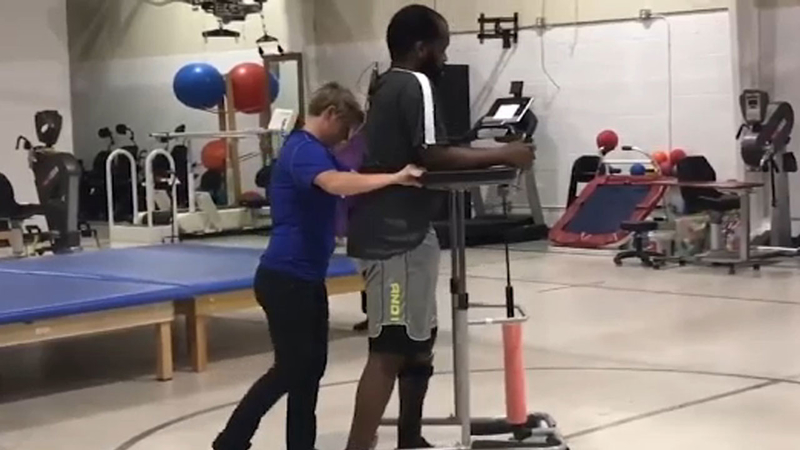 GALVESTON, Texas (KTRK) -- One step at a time Devyn Holmes has continued to beat the odds, this time walking with assistance at a graduation ceremony.

ABC13 Eyewitness News was the only team invited to capture the moment Holmes graduated from his residency therapy program at Transitional Learning Center in Galveston.

"Despite his physical injuries he's made a really long journey here over the six months, and really, we're very proud of him," said Dr. Dennis Zgaljardic, neuropsychologist and clinical program director.

Even taking these few steps was more than a year in the making.

It was Easter Sunday 2018 when he was shot in the head during a Facebook Live broadcast.

Devyn was sitting in the driver's seat of a parked car at a gas station off Almeda and Southmore.

In the video, Devyn is seen trying to deescalate tensions as Cassandra Damper holds up a gun and pulls the trigger.

Now he is using that same social media platform to connect with thousands of people across the country.

Sharing each success like learning how to talk, write and stand with his online supporters.

"He motivated other people to go back to therapy," said his mother, Sheree Holmes.

His frequent updates, she says, has even saved lives.

"She said she's been having a rough week and she's been contemplating suicide, and every time she thought about it, Devyn popped up on her newsfeed like it was sign," Sheree said.

"I'm happy that people can use my story as motivation," Devyn said.

His journey has also meant self-discovery and personal growth.

"Before I got shot I was doing as I please, having my way, so coming here was a big difference because I don't get to have my way here," Devyn said.

His focus now is on truly taking those next steps alone.

"Soon I will be walking on my own, with no assistance soon," Devyn said, who hopes to be fully walking by July 4.

Learning about his brain injury has also inspired Devyn to go back to school and study psychology, and he says authoring a memoir is also in the plans.